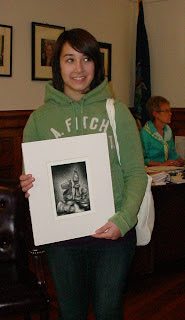 
when we were beset by a giant pink handbag. 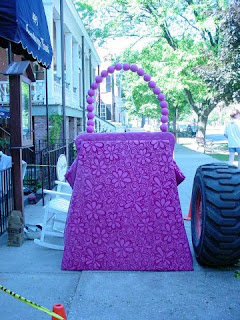 Luckily we and all other pedestrians were unharmed.

I will keep you all apprised of further encounters with oversized fashion accessories.
Posted by Rachel at 3:08 PM No comments:

Email ThisBlogThis!Share to TwitterShare to FacebookShare to Pinterest
Labels: Curiosities

Those purveyors of food filth may make my stomach growl but they certainly don't make my knees weak like those Bibliopornographers, those pushers of things leatherbound.

Witness Exhibit A: Red Hot Library Smut! The Nonist has no shame in revealing "full frontal objectification of the library itself", --oh the horror!-- with glossy photo after photo of the world's most achingly beautiful libraries from author/photographer/bibliopornographer Candida Hoefer's magnificent book "Libraries".

And now to part the velvet curtains for a look at Victorian clothbound biblio-porn with Exhibit B. The biblio-fetishist will find hours worth of images of rouged-up books from the golden age of book design.

Exhibit C points to the utter shamelessness of Bookseller Brian Cassidy and his beastly collection of biblioporn links, which features a grainy video of an antique, yet still curiously nubile, children's book. Juvenalia in flagrante delicto!

Well, after all this biblio-frisson, I am too hot and bothered right now to type away any more, so I will just leave you all with the news that the domain name of bookporn dot com is still available for purchase. I'm sure some sleazemeister will be trafficking away there shortly.
Posted by Rachel at 2:15 PM 1 comment:

Book Review: Milan Kundera's "The Unbearable Lightness of Being"

The Unbearable Lightness of Being, by Milan Kundera (NY: Harper and Row, 1987).

I had heard so many reader rhapsodies about this novel from my friends. In the bookstore, in a reversal of form, so many customers pressed the book into my hands and recommended it so highly that I brought it home to reside in my bedside town of book piles. It was a long-term tenant, however, just not piquing my interest each time I reached for a new book to read. When I decided to try the Orbis Terrarum Reading Challenge, in which nine books about nine countries by international authors are chosen, I blew the dust off this novel and decided I would travel to Czechoslovakia before and after the 1968 Prague Uprising for the second leg of my around the world trip. 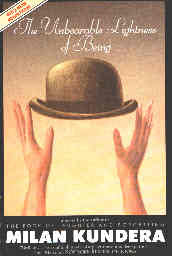 After having read it, I am of two minds about the book. I think it is an interesting and thoughtful book, one with many provocative images and unusual relationships and ideas. For someone who enjoys novels of ideas or who enjoys reading philosophy or poetry, I can understand how one could have such passionate views about it. I am not such a reader, preferring characters with lots of depth or unusual descriptions of time and place.

The book follows two couples throughout the Soviet occupation of Czechoslovakia, and the immersion into that historical era was interesting to me, so I kept slogging on, despite my lack of interest in the four main characters and their endless loop of: A) self-doubt and unhappiness driven by philandering lovers or B) sexual/psychological domination while wearing unusual haberdashery.

Kundera is certainly a vivid writer. I was struck in particular by two images he portrayed: a description of the human body as a machine with a nozzle for oxygen intake and the face as instrument panel for the clockwork brain; and a sad chapter about a dying crow, buried up to its neck in rubble by street urchins and rescued by Teresa, the most tormented main characters.

I wouldn’t state that I enjoyed reading this book, but I am glad that I learned more about that era in Czech history and I can at least converse intelligently with my buddies about this book. I do, however, look forward to my next armchair journey on this reading challenge, to a sunnier Egyptian climate, with Nobel Laureate Naguib Mahfouz in The Harafish. Onward!
Posted by Rachel at 11:11 AM 1 comment: Our little village thrift shop, Second Hand Rose, is a treasure house for vintage stuff and I'm always treating myself to a visit. I don't usually find too many great books, but the old linens, dishware, funky sweaters and tschotchkes never disappoint. I'm also usually lucky at sniffing out a great adornment for the bookshelves at the shop, like little statuettes of kids reading or homemade pottery, and this last week I picked up this gem which I thought was just a wooden trinket meant for a teachers' gift with little wooden book replicas. It turns out they are drink coasters. But now I'm wondering what the deuce is up with the half of a toothpick glued to the top of this coaster holder. A memento from a really great cocktail onion?
Posted by Rachel at 1:41 PM 3 comments:

There is an amusingly edifying post over at The Art of Manliness about the blog's Top 100 Essential Books for the Manly Library. The authors not only provide an interesting commentary and meaningful quote from each member of this masculine century but incorporate often imaginative photos of each title.

Here's how they summarize Oscar Wilde's "The Picture of Dorian Gray":

Packed with impeccable wit, clever one-liners and an excessive amount of egotistical vanity. At the very least, this book will show you the glory and the pitfalls of being the best looking chap around.

and now I don't have to read Hemingway's "A Farewell to Arms" with this succinct wrap up:

Written from the perspective of Lieutenant “Tenente” Frederic Henry it is a novel of epic manly proportions. As an American ambulance driver with the Italian army in WWI, Henry is injured by a mortar and while in the infirmary falls in love with his British nurse, Catherine Barkley. After healing and having impregnated nurse Barkley, Henry returns to his unit, only to narrowly escape fratricide. Henry goes AWOL and he and his bird flee to neutral Switzerland where they live a peaceful existence until Barkley dies during childbirth. In typical Hemingway fashion, he mourns her death by simply walking back to his hotel in the rain.

A Tartt in the Face 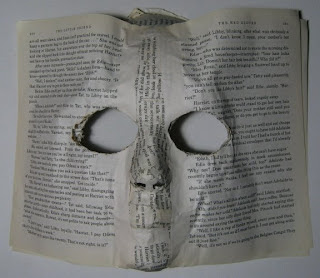 Clever Keltie from Canada has started a blog, 365 Masks, to make a mask from different materials each day this year. Mask #103 is made from the pages of Donna Tartt's "The Little Friend", helpfully pre-shredded for the artist by her two naughty cats. There are lots of other great masks on her site and I especially like the spiky mask made of toothpicks and the creepy minimalist spider one.
Posted by Rachel at 7:33 AM No comments:

The Bookshop Blog has posted a cranky article I wrote about the glamorous life at the old open shop and washing up the windows. Here's the opening paragraph:

Yet another customer sighs and notes that owning a used bookstore is the ultimate dream job. She muses on how lovely it must be for me to be surrounded by books, reading in between helping readers pick out the perfect novel; absentmindedly petting store cat Sam and sipping herbal tea while ringing up stacks of books.

To read more check out this link.
Posted by Rachel at 11:13 AM No comments:

It had been a few years since we had an event at our bookstore and this past Saturday we hosted a book signing with Sheridan Hay, author of the biblionovel "The Secret of Lost Things". This literary novel focuses on the arrival of a young Tasmanian transplant, Rosemary Savage, in Manhattan and her interaction with an exceedingly eccentric cast of characters at a used and rare bookstore. Dan and I were thrilled to welcome Ms. Hay and her lovely family to our shop and it was nice to have everyone talking, snacking and having a good time prowling around. That's Sheridan Hay below on the left with one of our fabulous bookstore customers. 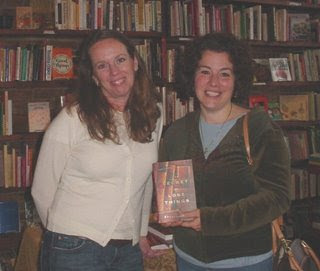 We have a few signed copies of this wonderful book available and I thought it would be fun to offer a free copy to one of my loyal Book Trout readers. Just leave a comment after this post by May 31, 2008 and I will randomly pick someone to receive a free copy sent to you in the mail.
Posted by Rachel at 10:10 AM 12 comments:

Our upstate New York colleague Dan Weaver, of the Book Hound, has an interesting article on Armed Services edition paperbacks at Biblio Unbound. Dan used to have an open shop in Amsterdam, NY, but now sells online exclusively. The Book Hound specializes in religious books, New York State history, particularly Mohawk Valley history, and older children's books. He also finds time to blog about things bookish on Bruised Reads, which I recommend for its down-in-the-trenches library sale reports and thoughtful book reviews. Lots of interesting reading!
Posted by Rachel at 11:12 AM 1 comment: