A Bookseller/Customer's View of the Sept. 13-14, 2014 Brooklyn Antiques and Book Fair

The inaugural Brooklyn Antiques and Book Fair was held this past weekend at the spanking new Greenpoint Expo Building and this was also the first show held at this new venue. Everything was very sparkly and shiny as my daughter Leigh and I attended on Saturday afternoon. A two-hour preview had been held the night before, and my conversations with various booksellers report that attendance and sales were good. When we arrived around 11 am on Saturday, the crowds were respectable, with several people browsing around each of the booth and good numbers of book purchases tucked under their arms, always healthy signs. 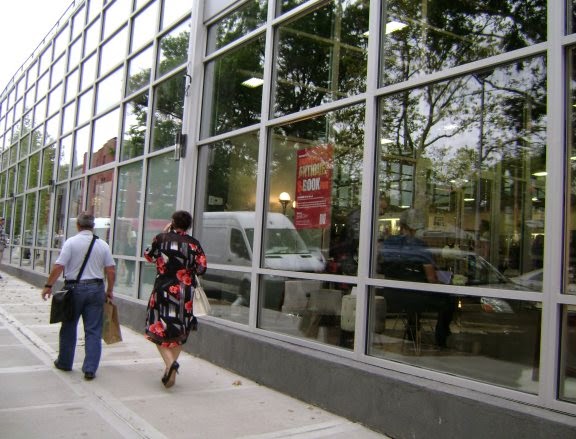 I liked the sleek glass and chrome lines of the Greenpoint Expo and the lighting inside was really good for viewing the books, even on an overcast day.

There were some exuberant customers, as well. This wise guy jumped in as I was steadying my camera for a shot of a bookseller friend, so that gives you some impression of Brooklyn's biblio-energy. 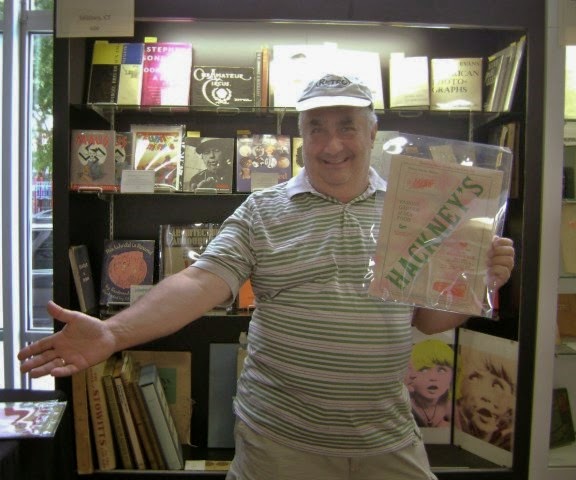 I first spied Don Lindgren of Rabelais, in Portland, Maine, who brought a savory sampling of books and ephemera about food and drink. An eye-catching array of bookseller brochures and postcards were on the front table as you checked in, but none more so than Don's lurid trade card, a purplish selection of head cheese and other jellied meats, which is sure to be my favorite book mark for a while before I enshrine it on our bookshop wall of biblio-flotsam. 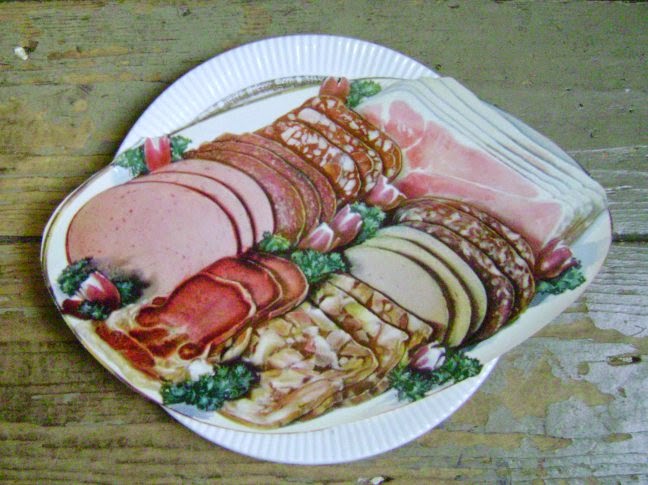 Here's a snap of Don with the book that he deemed the most interesting in the smorgasbord that he brought along to the Fair: 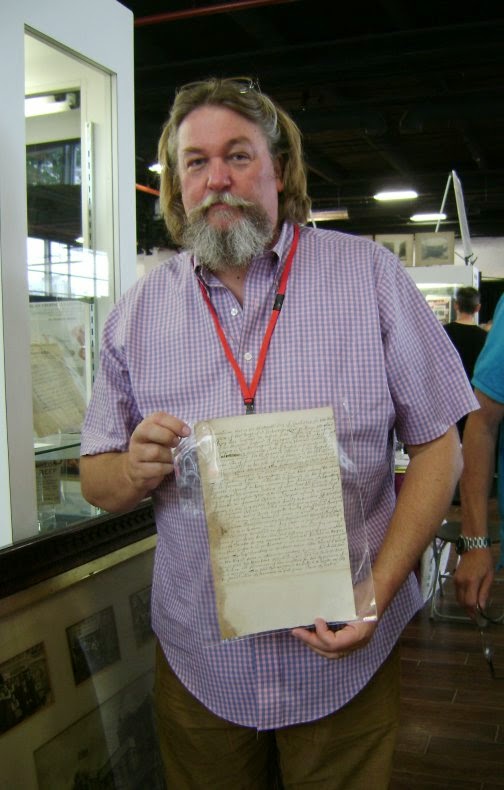 It's basically a 1697 liquor license from that bastion of Puritan culture, Massachusetts. An exquisite historical item indeed. 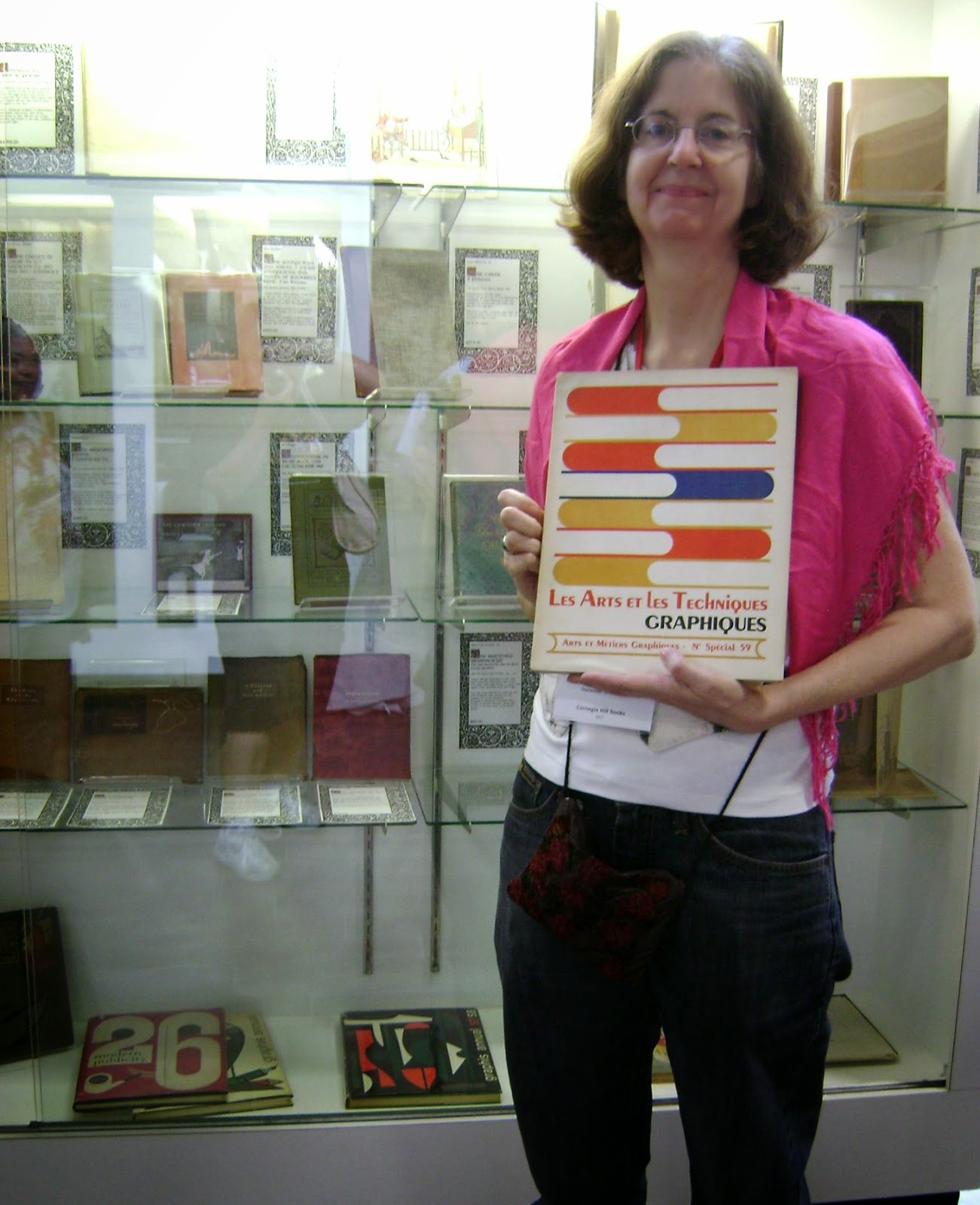 Right around the corner from Don was my former Albany Antiquarian Book Fair booth mate, Ann Brockschmidt of Carnegie Hill Books. Ann's specialties include art, design, and architecture and here she displays "Collectif", a jazzy 1937 French volume about book design. That front cover illustration of a pile of books is so sharp. Ann's lighted display case was chock full of these kinds of treasures and she had the great idea to display a short catalogue description and the price of these items behind each of them printed within an attractive Williams Morris-esque border.  I thought that was very smart, as it gives browsers more of an idea of what an otherwise unprepossessing volume might contain within.

I bought a couple of books from Sanctuary Books for my reference library, Strange and Wonderful: An Informal Visual History of Manuscript Books and Albums,  and Shakespeare's Beehive. The former showcases a great variety of unique handmade books from a variety of eras and I was interested in obtaining it both for the intriguing images and for examples of how to catalogue such one-of-a-kind material. The latter is a fascinating look at the 1580 dictionary which Daniel Wechsler of Sanctuary Books and his colleague George Koppelman purchased and believe to be Shakespeare's own, heavily annotated copy.

I was persuaded to buy both of these books by the knowledgeable and enthusiastic young woman who works for Sanctuary Books, whose name I unfortunately didn't get. As she was totaling up my purchases, I saw my CABS 2014 colleague Evan Bates of Pictograph Books, and I helped sell him on the Strange and Wonderful volume too, and perhaps sold the Sanctuary Books bibliographer on the virtues of CABS 2015. We also both ran into Nelson Harst, of Antifurniture, another CABS seminarian, so it was a mini-CABS reunion.

It was a pleasure to finally meet Forrest Proper of Joslin Hall Rare Books, after many years of Internet camaraderie. Here Forrest poses beside a counter display for a (then) forthcoming book about the malingering effects of atom bomb testing on Bikini Atoll. 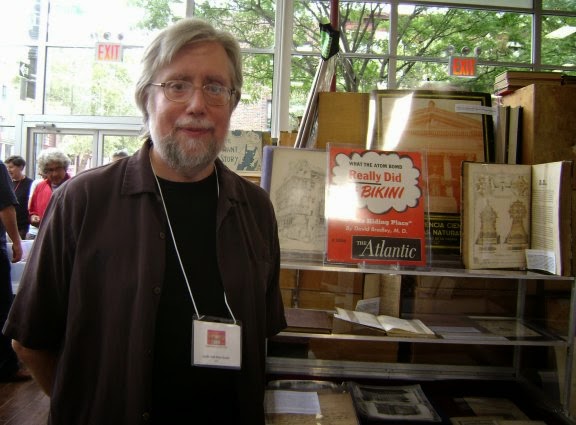 Richard Mori and his magical Mori van were in attendance and his booth was well populated with folks perusing his nostalgic children's books, art books and his inventive displays. He certainly packs in more colorful items per square inch of booth space of any book fair bookseller I know.

Aye caramba! One exhibited a scene of a man and woman busy with a small terrier and goat, respectively, while the second, a Walter Scott novel, displayed a kilted man showing his Scottish Independence with a little Highland Fling sans undergarments.

After that excitement, it was off to visit my bookseller buddy, Peter Luke, the Emperor of Ephemera. His body language was hilariously morose: he seated in a folding chair facing his U-shaped booth, legs out, hands laced behind his head, brooding. Turns out he had just discovered that the Brooklyn Book Fair was a two-day deal, and he was mourning his lack of a free Sunday. He reiterated that the preview had been very successful for him, and pointed me towards some great Adirondack railway brochures that I snapped up. While we were chatting, Michael Zinman, the ebullient keynote speaker at CABS 2014 strolled up, looking for items for his many areas of social history collecting, so after a quick handshake for both book maestros, it was off to browse some more biblio offerings

After another purchase, a history of New York City's Book Row, I had exhausted the patience and blood sugar levels of my daughter and pack mule (she was carrying  my purchases so I was free to talk, which in my case involves lots of wild gesticulations). It was time to get her some sushi and trudge back in the pouring rain, our books hidden under our shirts to protect them from the elements.

The next day we visited the American Museum of Natural History, where, after a solid two hours in the Hall of Minerals (payback for yesterday's book fair. Ask me about fun facts about stibnite) we ferreted out a small but very edifying and visually appealing display of scientific illustrations from the Museum's rare book collection. The exhibition runs through October 19th.