There's another helping of book review to serve forth for my Books About Food Reading Challenge, having read the delightful memoir, "Stealing Buddha's Dinner", by Bich Minh Nguyen, NY: Viking, 2007). The first book I read for this event was another memoir about growing up in an American immigrant family, Diana Abu-Jaber's "The Language of Baklava". This book had similar themes about straddling two cultures and finding one's own adult identity, though the main characters switched from being an American Arab to being a Vietnamese refugee.

Nguyen's book starts with her earliest memories of being a toddler in a cold and drafty house in Grand Rapids, Michigan, living with her extended family of her father, older sister, grandmother and five adoring uncles. We find out early on that the family fled Vietnam during the Fall of Saigon in 1975, but we don't know what happened to the girls' mother until much later in the book. Her father works long hours at a pillow factory and sleeps with a ceremonial sword on the downstairs sofa to protect his family. His mother, Noi, is a devout Buddhist who cares for the girls and cooks the meals, and is the quiet matriarch in the family.

The uncles provide comic relief and spoil the Nguyen girls with sweets, rock and roll music and toys. The uncles' lairs throughout a succession of moves are a nostalgic morass of Seventies pop culture: shiny rayon clothes, ABBA albums, leather recliners, elaborate hi-fi setups, silver wallpaper. They easily turn off the switch from work to play when they come home from their factory jobs, unlike Nguyen's dad, who spends his few off-hours tensely smoking on the porch or playing cards and billiards with his Vietnamese friends, marinated in lots of booze. 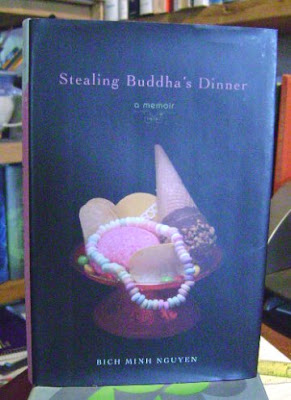 The family is enlarged when Nguyen's father marries Rosa, the socialist teacher and daughter of Mexican migrant workers. She brings her daughter Crissy with her and the family now has to figure out how to integrate this new mother and cook. Rosa is pursuing college and post-graduate studies throughout the book, so her cooking time is precious and limited to a few standard meals that the Nguyen bunch stoically eats without much relish. The author, however, through the lens of adult insight, has a great empathy for her stepmother and insightfully shows her isolation from the rest of the family when they go to Vietnamese parties on the weekends. There, the tall and curvacious Rosa is left to herself, separated by age, gender and language from the cliques of poker-playing men, the TV-watching children and and extended sessions of gossip and deep-frying among the slender women of the kitchen.

Young Binh doesn't want "weirdo" Vietnamese food made from exotic ingredients from the Asian grocery, nor does she savor Rosa's timesaver, budget meals bought with coupons and made from generic cans and boxes. Instead, she covets American junk food: Pringles, a chocolate rainbow of candy bars, Dairy Cones with strawberry dip, McDonalds burgers and buckets of fried chicken. She wants to eat what her conservative, Christian, primarily Dutch heritage neighbors and schoolmates eat so she can fit in, but finds this a constant struggle. As she points out, coming of age in the Seventies and Eighties was to grow up before being ethnic was cool, before phrases like "multiculturalism" and "diversity" were embraced. And Nguyen is unable to become popular like her two pretty (her author photo says she's a knockout too), more gregarious older sisters.

She finds solace in reading and the titles of many of the classic juvenile books she hoards in her special bookcase and which she nests among her bedclothes, will appeal to all those who came to bibliophilia early in life. While her sisters spend their spare change on banana lip gloss and Pat Benatar records, the author buys (and racks up huge library fines) for books outlining the adventures of her friends Encyclopedia Brown, Ramona Quimby, Charlotte the Spider, the March family, Harriet Welsch, and the entire Ingalls clan.

Slowly, though, she comes around to appreciate her grandmother's daily offerings of fruit, (first offered to Buddha on a lacquered salver) carefully peeled and sliced; her Pho slippery with noodles and slices of oxtail; and even Rosa's holiday tamales. Though she may still covet "regular" American foods, she finds greater appreciation for her family's spicier tangle of comfort foods.

"Stealing Buddha's Dinner" does not mix in as much wit as "The Language of Baklava", but was as enjoyable for its detailed and sensual evocations of time and place. Foodie readers will enjoy the Bacchanalian descriptions of Vietnamese holiday feasts and Seventies' spreads at "Ponder Rosa" (the Ponderosa steakhouse chain), while others will delight in the way the Nguyen family changes and grows during their years in America. The author explains a lot about traditional Vietnamese and Buddhist culture and how aspects of both clash against against modern American culture.

Recommended reading for foodies, fans of biography and memoir, social history and the American immigrant experience.
Posted by Rachel at 11:37 AM 5 comments: