Musings on a Lone Leaf Day 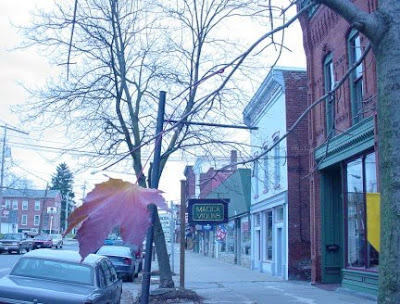 It is a gusty, chillier-than-usual November afternoon in the bookshop and I feel a little restless as I walk about the shop trying to rev up my circulatory system. Sam the cat is no help curled up in my box of packing peanuts and bubble wrap strips. He should be on my lap warming me up. But instead, I am as the lone leaf shown above on the maple tree outside the shop, flapping aimlessly about.

I could dust some shelves, straighten some paperbacks, water the plants, but no, that's more ennui for the pile. Instead, I found myself drawn to one out of a pile of books waiting to be shelved. The title is just too good: "I Been in Sorrow's Kitchen and Licked out all the Pots" (by Susan Straight, NY: Hyperion, 1992). Now, that is an evocative title! But I imagine it gave the publisher and book designer apoplexy being so wordy.

"How am I supposed to get book reviews for a three-foot-long book title?",
"How do I pack this title onto the spine?"
"Even the acronym is long! (IBISKALOATP)"

That got me thinking about other great, wordy book titles:

Been Down So Long, It Looks Like Up to Me (Richard Farina)
For Colored Girls Who Have Considered Suicide When the Rainbow is 'Enuf (Ntozake Shange)
Oldest Living Confederate Widow Tells All (Alan Gurganus)
From The Mixed-Up Files of Mrs. Basil E. Frankweiler (E.L. Konigsburg)

All of them very evocative and I read and loved the last two books, so I am partial to these titles. However, apparently publisher wisdom decrees that book titles should be kept small, even though this study by Lulu.com offers a disparate analysis.


This web site informs us all that the world record holder (at 1,433 characters) is an Italian novel (I think it's a novel, I dozed off after trying to read the garbled web-translation of this monstrous title) but here's an article from Denmark which assigns the book title verbosity championship to us Americans. Be sure to read the comments under that article, including the snappy one by Jamie considering inappropriate punctuation of overlong titles. And Foreword Magazine had an article earlier this year considering the trend towards lengthening book titles.

From cataloguing many a book in 12+ years as a used and rare bookseller I can attest to a vogue in wordy book titles during the 19th century, in some cases exhausting the character limits of my software and necessitating a "to be continued below" disclaimer in my book description. But I maintain a fondness for the verbose book titles above. Back to licking the pots....
Posted by Rachel at 3:31 PM 3 comments:

Email ThisBlogThis!Share to TwitterShare to FacebookShare to Pinterest
Labels: Curiosities

Every year the Book Trout and her buddies plan an escape weekend to leave motherhood, wifery and jobs behind and just enjoy each others' company. We shop, eat out, sight see, and most importantly, reconnect with each other back at the hotel room accompanied by a bottle or two of red wine and a bucket of nail polish for our pampering pedicures. Over the years we've watched our friend Laura race in the New York City and Philadelphia marathons, shopped at outlet malls, gotten roped into judging a costume contest at a Mystery Weekend and attended a crafts fair in Vermont.

This year we planned our annual retreat in Ithaca, New York, a funky college town set among beautiful steep hills and 19th century homes at the southern tip of the Finger Lakes region. We arrived Friday evening and left Sunday morning and managed to pack in a lot of fu 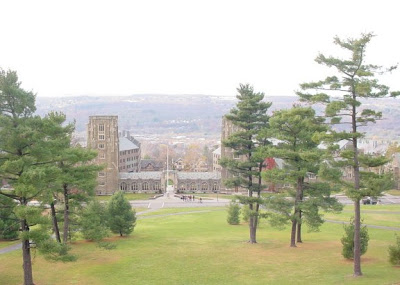 n into our 48 hour pass. We ate out, shopped for crafts and clothes in Ithaca Commons, tooled around the Farmer's Market and Cornell Campus, attended an elegant opening at the Henry F. Johnson Museum of Art and, of course, squeezed in a lot of chatter and laughter.

The Ithaca Farmer's Market was a treat. Despite the cool drizzle of our November morning, we whiled away a lovely several hours admiring gorgeous displays of autumn vegetables, baked goods and artisan crafts. While slurping up my Cambodian noodle breakfast and lugging my clanking bottles of hard cider I was drawn to the artwork of Ali 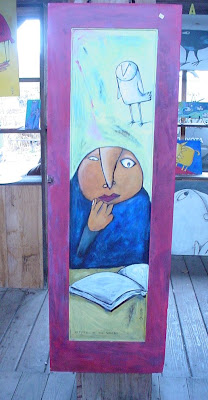 ce Muhlback. She paints moon faced figures on wood, including this great bookish artwork entitled "Altered by the Words" that I really coveted.

I was able to convince my bibliophile buddy Linda to break away from the pack and search out Autumn Leaves Used Books, a triple-decker bookshop with a vegetarian cafe upstairs, books on the well-lit, well-populated main floor and used records on the lower level. I was pleased to scoop up several titles that my customers are looking for and of course, several for myself, including a hardcover of Brian Jacques second Redwall novel "Mattimeo" and "Heat" by Bill Buford, about his apprenticeship with chef Mario Batali.

Autumn Leaves bookseller Rick Sage was a delight to chat with and was kind enough to let me snap his photo while admiring a coffee table book about Tijuana Bibles. Linda was also delighted to snag the collected poems of Allen Ginsberg, who, she related to us all later, she caught at Madison, Wisconsin coffee houses reading his poetry (with harmonium accompaniment)during her wild, go-go-boot-shod teenagerhood. 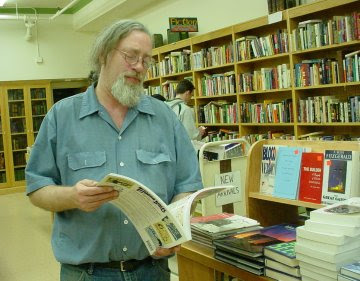 There are a number of other used bookstores in downtown Ithaca and the surrounding hills to explore another day, and I have since discovered that Ithaca has great literary value as the setting of many novels and as the home of some cool authors, so I hope to return soon for some more exploration and book hunting. The Tompkins County Public Library also hosts a twice-annual book sale which is billed as the third largest in the U.S., so other book hunters may want to take note!
Posted by Rachel at 11:32 AM No comments: 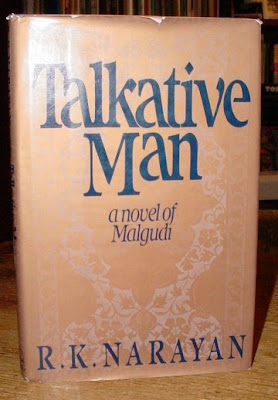 I am now 2/3 of the way across the globe as part of my armchair journey on the Orbis Terrarum Reading Challenge(nine books by nine authors from nine different countries)having just visited India by reading The Talkative Man: A Novel of Malgudi, by R.K. Narayan, NY: Viking, 1987.

This was a short hop as the book is a short novella of only 123 pages. "The Talking Man" is a fable set in a rural village in South India which is the fictional setting for many of Narayan's other works. The tone and dialogue are light and humorous and are perfect for describing the gossip, intrigue and comedy of manners that ensue in everyday Malgudi.

One day a mysterious visitor who works on equally mysterious projects around the world for the UN worms his way into local village life, first camping out in railway station much to the detriment of the agitated station master's mental health. The stranger then stays as a lodger with TM, a well-off man who dabbles in journalism. The Mysterious One carries on an inappropriate romance with a young college student and after hearing from other women around the globe who have been romanced by this cad, TM and the other villagers save the young lady and her family from embarrassment in a farcical ending involving pompous government ministers, apocalyptic scenarios involving weeds, and hecklers of every stripe.

I found this novella thoroughly enjoyable and will seek out other Malgudi novels so I can visit again. Recommended for those who enjoy comic novels, Indian literature and short romps where villains get their comeuppance.
Posted by Rachel at 5:09 PM No comments: