Book Art at the Albany Airport

It was alternately delightful and maddening to see some artwork made from books when I was recently at the Albany (International!) Airport. "The Imaged Word" exhibition is currently on display in third floor Airport Gallery until January 9, 2011 and can be viewed daily from 7 am to 11 pm.

There were some cool paintings modeled after vintage paperback covers... 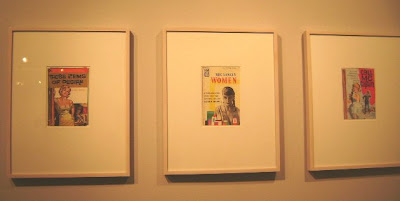 And this obsolete reference volume hanging with its guts falling out over the gallery staircase... 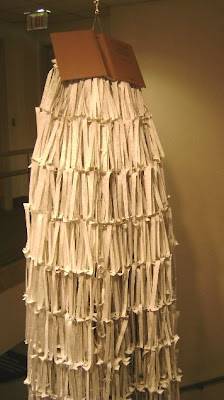 This photograph of artfully arranged antique schoolbooks made me wince.
And made my spine hurt. 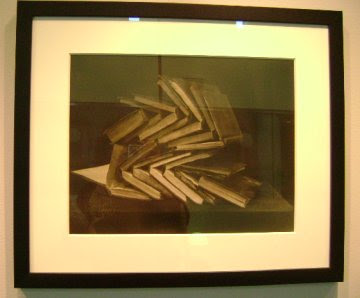 This artwork of beetle and scorpion cut out from otherwise undamaged and still relevant photography seemed like wanton destruction of two good books. There are certainly many other crappier books that could have been sacrificed to the insect art gods. 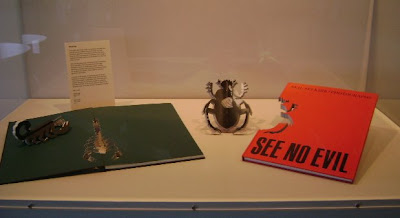 Phrases from a poem adorned the surfaces of these decorative objects. 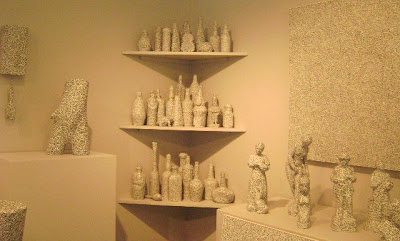 A book arch of unjacketed books by Aaron T. Stephan, entitled "Building Bridges", was fun to inspect up close. I couldn't make out any of the titles as no spines were facing out. This certainly takes the wind out of my sails about my sometime-in-the-future project to construct something similar out of the 50+ copies of Robert James Waller's overpublished bestseller "The Bridges of Madison County" that reside in a corner of our store basement. 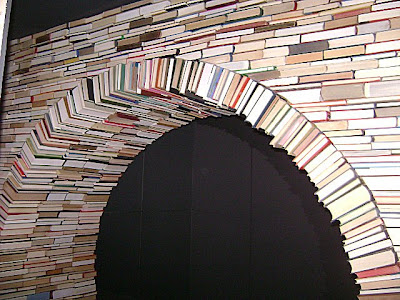 Artists in "The Imaged Word" exhibit include Fern Apfel, Gabe Brown, Gayle Johnson, Paul Katz, Scott McCarney, Amy Podmore, Fawn Potash, William Ransom, Aaron T. Stephan, Robert The, and Barbara Todd. It's well worth checking out the exhibition if you find you are waiting for a delayed flight. The Airport Gallery is on the public side of the terminal, soif you are a passenger you would need to inspect it before you take off your shoes and get super-scanned by airport security.
Posted by Rachel at 8:51 AM No comments:

Tethered as we are to our open shop, most weekend book fairs and festivals can't pry us away, but this year I was determined to participate in The Chronicle's Autumn Leaves Book Fair in nearby Glens Falls which took place this past Sunday, November 7th.

I had heard so many positive things from customers and book folk about how the Book Fair had really grown and had such a diversity of local authors, publishers, booksellers (including our favorite independent new bookseller, Red Fox Books) and other participants and the reality met my expectations. There was a nice crowd in attendance, lots of readings and demonstrations by Book Fair participants and the Chronicle and hotel staff were lovely to work with. There were some stellar authors participating in the Book Fair too, including Joseph and Jesse Bruchac, David Pitkin, Bruce Hiscock, Joseph Peck (a Schuylerville fave!), and James H. Kunstler.

Husband Dan manned the bookstore while my teenage daughter/book slave and I packed up a small percentage of our books and sallied forth to the lovely and historic Queensbury Hotel to set up early Sunday morning. Amazingly, I was able to stuff six folding wooden bookshelves, twelve milk crates full of books and a few boxes of assorted supplies* into the back of my antiquarian Jeep Cherokee and we spread out our wares. 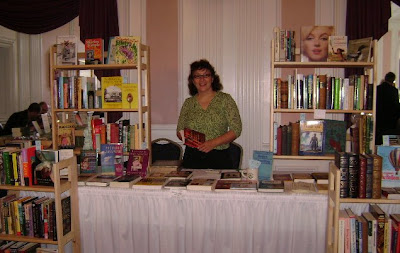 This was my first experience selling books outside the shop but I thought regional authors and history would sell well (they were actually our "midlist" sellers). I also packed up a smattering of art, music, cookbooks, children's books, some novels and an assortment of non-fiction. At the last minute I popped in several books on hot air balloons because of the popularity of the Adirondack Balloon festival and they sold out. Next time I would obviously bring more ballooning books (and maybe some planes, trains and automobiles) and would bring more older children's books and books about art, music and popular culture, as these were strong sellers.

I would also bring fewer books, but face more out, as they disappeared at a much more rapid rate. My lumbar region would have thanked me had I refrained from filling the bottom two shelves of each wooden bookshelf. Nobody even noticed any book that was below waist-level anyway.

And next year I would bring a big sign with "Old Saratoga Books, Used and Rare Books" on it to pin to that big white space in front of our table or display prominently. The bookmarks and pamphlets didn't grab people's attention readily and I was constantly being asked who I was and what my booth was about. I was also asked if I was the Autumn Leaves Bookstore as "Autumn Leaves" was more prominently on my Chronicle-supplied name tag. 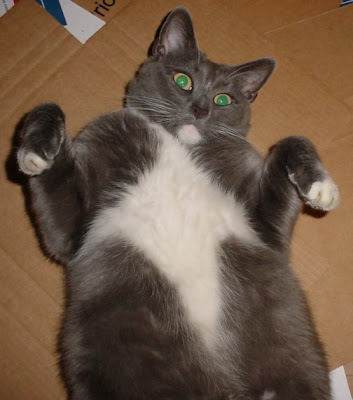 A framed picture, or maybe several pictures, or maybe even a poster of Sam the Bookstore Cat would also be an attention-getter and conversation-starter. He certainly has his fans! I recognized a few customer faces and would explain that we were Old Saratoga Books, in Schuylerville, and would get blank stares until I mentioned our handsome gray and white cat-in-residence and then there would be smiles of recognition and effusive inquiries after his health. 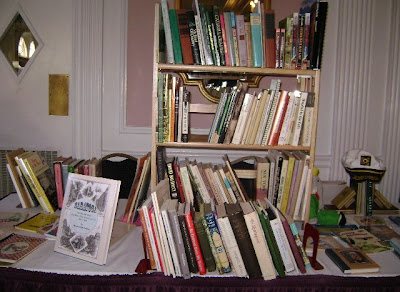 I was delighted to see my friends Victoria and JoAnn manning a used book table as Those Three Women (okay, so there was only two of them; their books were still cool to peruse). Here's a shot of their shelves at the end of the day when they had sold quite a bit of their inventory. I picked up a great 1940s cocktail book, a cookbook or two, some local history titles and assorted other books from them, and then they threw in that snazzy Lake George Steamboat Company hat from the photo so it is now adorning my nautical section back at the shop.

*Essential book fair supplies include a couple of blank notebooks, bookmarks, pamphlets, pens, bottled water, plenty of monetary change (I have a great fake book to house it in), calculator, plastic bags, a couple of funky bookends, lots of utilitarian metal bookends, coffee cups to hold the bookmarks, blank index cards (for making quick shelf signs), etc.
Posted by Rachel at 9:34 AM 1 comment: