I am going to try and squeak through with a strong end of the year finish on my Orbis Terrarum reading challenge. I was supposed to have read 9 books in 9 months by 9 authors from 9 different countries to expand my knowledge of world literature, and while I have read nine such books, I only have eight book reviews under my belt (if I count this present one) which leaves little wiggle room for the final book review. I am going to press on, because I want to try another reading challenge in 2009, and hope to clear the decks with a clean reading conscience in these final days of 2008.

For my eighth Orbis Terrarum read, I savored Romesh Gunesekera's Reef (NY: Riverhead Books, 1996) about life in his native Sri Lanka before civil war tore apart this beautiful island nation in the 1980s. I had previously enjoyed reading Michael Ondaatje's "Anil's Ghost", which is also set in modern Sri Lanka and contrasts lyrical descriptions of the lush, tropical setting and the hellacious ravages of war. I was not disappointed with this second portrayal of the former Ceylon, a giant tear drop set in the Indian Ocean.

Reef was was a finalist for the Booker Prize and one can see why it garnered this attention. Gunesekera's writing is deceptively simple, yet it conjures up exotic and unusual images. The novel depicts the coming of age of Triton, a young boy taken in by a bachelor marine biologist, Mr. Salgado, when his mother dies and his father descends into alcoholism. Triton grows up to become an accomplished cook and main household servant for Mr. Salgado when he gets into a struggle with an older manservant, Joseph. Here's Gunesekera's ominous description of Joseph:

"He was not a big man but he hd a long rectangular head shaped like a devil-mask. His face was heavy and his lower jaw jutted out, making his head look detached from his bdy. A sullen heart compressed the muscles beneath the skin of his face in a permanent grimace. He had big hands that would appear out of nowhere. And as I was always trying to avoid him and never looked up at him, the sight of his hands suddenly on a doorknob or reaching for a cloth was terrifying."

Triton is not educated, but he is extremely observant and reads and re-reads the contents of the Salgado book shelves. Triton is devoted to his benefactor and reveres his live-in lover, Miss Nili, but he has nothing but disdain for Salgado's boorish houseguests when they trample his immaculately clean rooms and gobble his intricate banquets. A Christmas turkey feast is wonderfully etched by the author's words, as he shows each dinner guest's inner soul by the way they approach their plates.

Ultimately, the story ends with a melancholy and reflective finish, but it was a treat to read. This book will remain in my home library, a rare honor for me to bestow upon a novel. Highly recommended.
Posted by Rachel at 1:58 PM 1 comment:

Happy Holidays to All 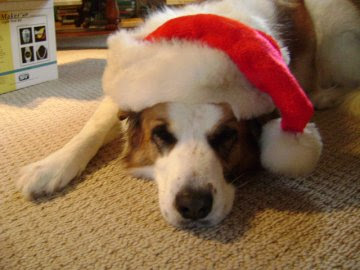 May everyone enjoy as restful and happy a holiday season as my sweet dog Martha. Peace out.
Posted by Rachel at 12:23 PM No comments:

Email ThisBlogThis!Share to TwitterShare to FacebookShare to Pinterest
Labels: Holidays 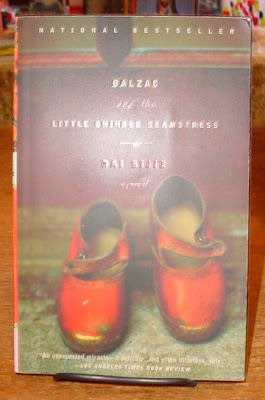 A seventh leg of my Orbis Terrarum Book Reading journey is complete. I tried to read Primo Levi's "The Periodic Table" about pre-World War II Italy, but much as I wanted to dive in, it was just not meant to be. I picked up and read the first several chapters a bunch of different times, but couldn't get into it, so I switched over to another book which had logged some time on my nightstand, Chinese-born writer Dai Sijie's novel "Balzac and the Little Chinese Seamstress" (NY: Anchor Books, 2002).

This novel was a treat, being not only a book about books and reading, one of my favorite genres, but as a vividly-portrayed look at 1970s China during the harsh re-education policies of the Communist government. The heroes of this too-short novel are teenagers Luo, son of a dentist who dared mention publicly that he had worked on the teeth of Chairman Mao, and his unnamed chum, the son of two medical doctors, who are branded "intellectuals" after their extensive middle school education and banished to a remote mountain farm village. There they live in an unheated agricultural storage building and spend their days hauling baskets of excrement up the mountainsides to fertilize distant fields of opium.

Our young heroes do not know if they will ever be allowed to return to their families in the big city of Chengdu, but find sparks of hope for a way out of their dreary lives when the Village leader discovers their talent for storytelling. They are also allowed a bit of freedom to travel to infrequent movie showings at the nearest market town so as to relate the embroidered plots to their villagers at a later date. It is during these visits that they make the acquaintance of a tailor's daughter, the little Chinese seamstress of the title, and reunite with another teenaged friend from Chengdu, Four-Eyes, whose poet-mother smuggled in a secret suitcase of books, including prized novels by Balzac.

Sijie himself was "re-educated" during the 1970s and left China a decade later for France, where he has since worked as a writer and filmmaker. The imagery in the book is very cinematic and visual, and I could imagine a bird's sweeping view of the mountainous landscape and steep pathways that pepper the book.

I would highly recommend this book to other readers, particularly those who enjoy a bit of history woven into their fiction. Images from the book have stayed with me and I find myself thinking about the symbolism of the red-beaked crows that watch over our protagonists and of the crazy home dentistry scenes in another chapter.

I have read two more books for this 2008 reading challenge (9 books by nine authors from 9 different countries in nine months), and am hoping to bang out two more reviews about them to meet the end of the year deadline, so stay tuned.
Posted by Rachel at 11:43 AM 1 comment: 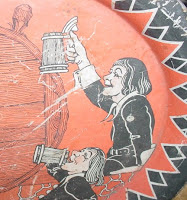 I have a second guest post on Foreword Magazine's Shelf Space blog about Great American Writers and their penchant for alcoholic fuel which appears today. This is a followup to the Literary Libations research I blogged about earlier here at the Book Trout.
Posted by Rachel at 11:58 AM No comments:

The Deconstruction of Used Books

Rachel is a guest blogger on Shelf Space, a book blog that Foreword Magazine publishes for librarians and booksellers. Today's subject is "The Personality of Used Books", if you would like to check it out.
Posted by Rachel at 10:54 AM No comments: 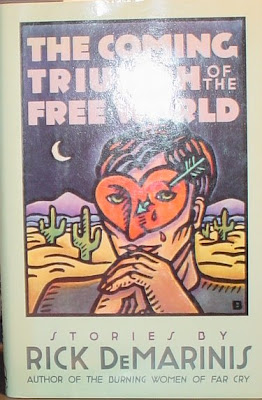 Shelby is the lucky winner of the November Book Giveaway, a copy of Randy Wayne White's "The Sharks of Lake Nicaragua". White is better known for his Fort Myers, Florida area detective novels but this book is a collection of fishing tales from his days as a guide. Congratulations Shelby!

I thought I would switch things up and provide a book of short stories for the December book giveaway. I love the bold book jacket art by Bascove, and this book beckoned from the shelves: "The Coming Triumph of the Free World: Stories by Rick DeMarinis" (NY: Viking, 1988). DeMarinis is a critically acclaimed author of many novels and works of short fiction and even the author of a book about writing short stories. The arts magazine Cutthroat even hands out an annual Rick DeMarinis Short Story Award, ($1,250!) so if you love short story collections, this book may beckon to you as well.

To enter the book giveaway, simply leave a comment below by midnight of December 31st, 2008, Eastern Standard Time, and the winner will be randomly selected from the participants. Good luck to all!
Posted by Rachel at 6:44 PM 13 comments: