Our E-list No. 4: Photography has just been issued and highlights some unique, signed and otherwise interesting books on photography, photographic ephemera and original photographs. Here is a sample for your delectation: 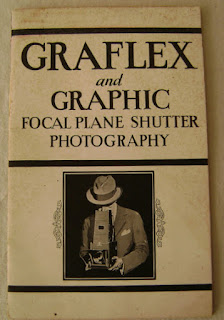 Provides general instructions for using the medium- and
large-format Graflex cameras and the mechanics of focal plane shutter photography, which allows for sharper images of fast motion subjects and sports photography. $40 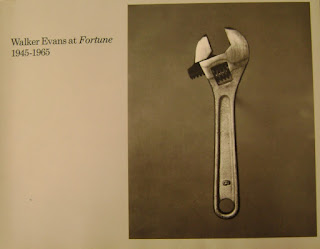 Catalog for an exhibition at Wellesley College held 16 November 1977 -23 January 1978, the first showing of some of the photographs which
Evans took for Fortune during his long tenure with the magazine. They are quite different from his iconic Depression-era images of sharecroppers and Southern small towns, as published in Let Us Now Praise Famous Men, though these urban street scenes, architectural details and common hand tools share the same quiet, austere beauty. $25 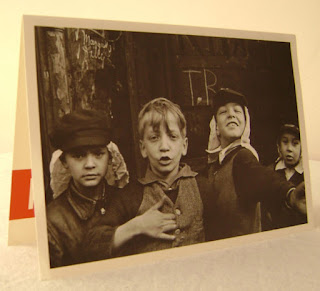 11) [Helen Levitt] [Photographic Ephemera] Card brochure listing lectures, gallery talks, films and other public programs and resources associated with an exhibition of the work of New York City photographer Helen Levitt. The exhibition was held at The Metropolitan Museum of Art, April 1- June 28, 1992. The brochure measures 14 x 21 cm when folded
over. The front features Levitt's iconic 1940 photograph of four boys playing in the street with white handkerchiefs stuck into the back of
their caps so they look like mini-Foreign Legionnaires. Very Good. $15 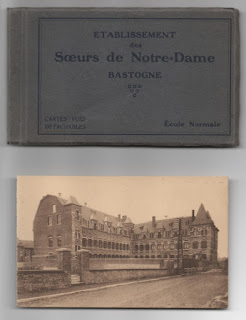 
Good. First postcard is detached and has penciled nun's name on verso.

Photographs show various interior and exterior views of this school, including the library, chemistry lab, music room, home economics kitchen, chapels, classrooms, art rooms, etc.The Sisters of Notre-Dame ran this Catholic primary and secondary school in the late 19th and early 20th centuries in this small town in the mountainous Ardennes region of Belgium, near the Luxembourg border. The town was the scene of fierce fighting during the last year of World War II and it is possible that this school is the same educational facility as the present day Institut Nortre-Dame in Bastogne. Not found in WorldCat. $50

16) [Tintypes] A set of three tintypes, circa 1860s, each a portrait of a seated man and standing woman (the better to show off one's best dress and its underlying voluminous hoops and petticoats). Each measures 2 x 3 inches. Each tintype is backed with printed paper
label: "A.E. Alden's, Patent Premium Pictures, taken only at corner Grand Division and Fourth Streets, Troy, N.Y.". Each tintype has faint
rosy coloring added to subjects' cheeks. Scratch to woman's face in one tintype, some erosion to second image at left border, scratch across lower extremities in third image. $20 for the trio. 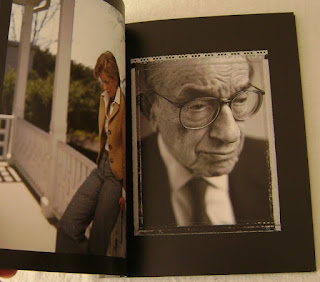 Consists of 26 high resolution reproductions of photograph portraits in black and white and color of various students, athletes and such clients as Elie Wiesel, Alan Greenspan, Christine Todd Whitman, Lance Armstrong and author Azar Nafisi. Post-it note on inside front cover
with handwritten instructions for reproducing these prints, possibly by Deal.

David Deal is the commercial photographer-turned-attorney who is currently at the midst of the imbroglio involving publication and ownership rights of the photographs of the late Vivian Maier. Maier is the nanny whose secretive street photographs of 1950s-90s New York were unearthed from a storage unit in 2007. Maier's work has been the subject of a film and several books and exhibitions. $40 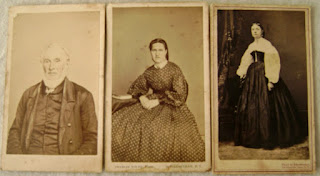 Sinclearville is a small village in Chatauqua County, in far western New York State. It was known as Sinclearville from 1809 when it was founded by Revolutionary War Major Samuel Sinclear until 1887, when it was officially incorporated and "clarified" the spelling of its name to Sinclairville.

This trio of cartes de visites: $30 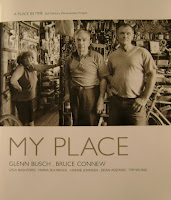 A photoessay that is part of Canterbury University School of Fine Arts' The Place in Time Project, in which New Zealanders are interviewed and photographed in situ in their homes, shops and other favorite haunts. Many black and white photos. WorldCat records only three copies, all residing in New Zealand. No other copies listed for sale in the trade. $50 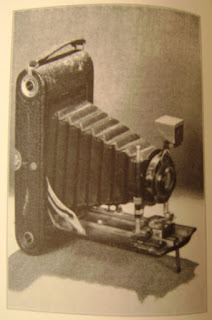 A look at the history of photography from the Magic Lantern era,
including daguerreotypes, collotypes, gelatin dry plates,
phantoscopes, celluloid film, kinetographs and various other
Eastman-Kodak inventions through to the printing date. $80 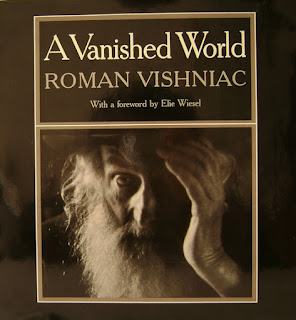 This book represents but a fraction of the photographs of Jewish village life which Vishniac took on various trips to Ruthenia, Poland,
Czechoslovakia and other parts of Eastern Europe in the 1930s. Vishniac sewed many of the negatives in the lining of his clothes when he came to the US in 1940, and others were safeguarded by his father
while in hiding in France during World War II. Vishniac died in 1990. $150 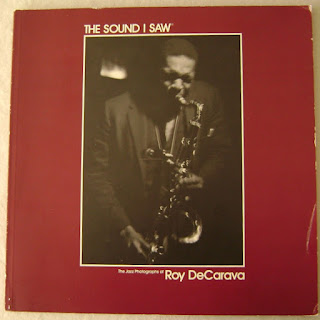 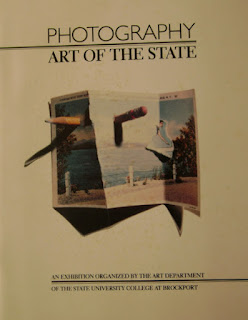 Posted by Rachel at 8:14 AM No comments:

The Book of the Day: Cheap Thrills at the Used Bookstore

Restaurants may have the Catch of the Day, but at Old Saratoga Books, we have The Book of the Day. It has become a daily source of amusement and pleasure at our mom and pop used bookstore, not to mention a quasi-rivalry, to see which one of us can sell The Book of the Day when it is our turn to man the front desk. 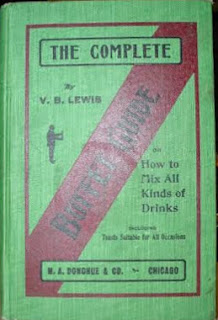 Sometimes the Book of the Day is one of our pricier books. It certainly perks us both up to have sold something in the three or four figures. Selling a nice Rockwell Kent illustrated Moby Dick was satisfying. Book of the Day kudos were earned for wrapping up an expensive cocktail book for a mixologist collector. Convincing a customer to splurge on a crisp copy of a signed modern first edition always brings a smile, but often the Book of the Day is something else entirely. 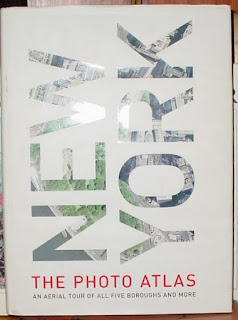 We salute each other whenever the Book of the Day is some honking big volume that resists easy shelving or which has thunked one of us in the head or tripped us up as it juts out from the shelves.  We both do our darndest to avoid taking them in but somehow these herniators and unwieldy tomes sneak in the shop. When these biblio-behemoths attract someone’s attention and go home with them, they are definitely the Book of the Day. 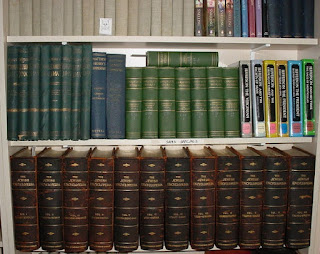 Selling the complete works of an author earns double Book of the Day honors. Sets of Dickens, Thackeray and O. Henry, the most common multi-volume works we encounter in our area, bring even more prestige, but I was never so chuffed as when I sold a set of 50 books about various kinds of antiques, written in Italian no less, to a woman who thought they would make a lovely engagement present for some lucky couple. The binding was naturally quite attractive, but they took up so much bookstore real estate and upstate New York is not chockablock with people who are fluent in Italian, so I had worried that they would molder on our shelves until Dan and I ourselves became antiques. 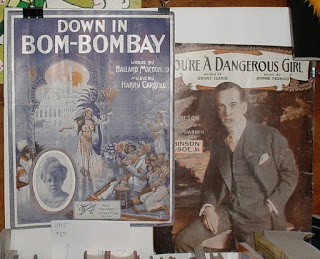 Selling a piece of ephemera earns high fives with us for the Book of the Day. Ephemera may be in vogue with the book buying public these days, but I find it hard to display in our traditional bookstore setup. Several years ago though, one of our talented customers bequeathed us with a handmade chest made from discarded card catalog drawers that we use for house much of our ephemeral stock, but mostly I just bag and tag (place in a plastic baggie and tack to a wooden bookshelf endcap) the items that are too small, wide or floppy to stand upright in the shelves, so they make us very happy when someone approaches the desk with thumb tack in hand.

The Book of the Day is often some poor book that has languished at the shop for years. Before we even opened our shop doors we responded to a Pennysaver ad about buying the stock of a retiring bookseller named Leonard. Some of these “Leonard” books, as we have referred to them now for over twenty years, somehow still populate the darkest recesses of our drama and poetry sections, no matter how many times we comb through and cull them. When a customer brings a Leonard book to the desk (I can recognize the former seller’s distinctive price code on the front flyleaf), I just about pull a rib muscle in quiet exultation.

Then there is that special breed of books that catch our fancy for reason of their exquisite jacket art or bindings or some strange title or subject matter that we face out or place in the shop windows. I love when these special books get adopted and validate my faith in their allure. 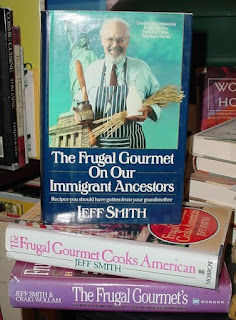 The Book of the Day could be some amazingly common title that someone brings to the desk and which I may reflexively think has been plunked from our 3-for-$1 bargain carts, but actually bears some audacious price (i.e., anything more than 33-1/3 cents). In this case, the Book of the Day might be Jane Fonda’s Workout Book, a cookbook by the Frugal Gourmet, a Da Vinci Code hardcover, or --be still my heart-- a self-help or business title. Bam! The customer is not only buying the Book of the Day but cleansing our shop.

And then there’s the Book of the Day category which makes each of us smile the most: when we sell the perfect book to the perfect person, like someone who relates that they have been looking for a certain title for years or to complete a series. Many Books of the Day have been purchased by one of our young customers who’s now in high school, who has been collecting books since he was two feet tall. His mom usually rewards him with a bookstore shopping trip after a successful semester and he always picks out interesting historical material, from biographies to Victorian store ledgers to ephemeral items. Whatever he buys is usually pretty cool and it’s so satisfying to ring up his book finds and see how enthused he is about them.


For all you booksellers out there, do you have Books of the Day?
Posted by Rachel at 11:39 AM No comments: