Writers in the Flesh at the Bookshop

In the dozen years that our used bookstore, Old Saratoga Books, has been open, we've had a few famous writers browse their way through the stacks and order books from us over the Internet. We are located in a quiet rural village of Schuylerville in upstate New York, but are only nine miles from Saratoga Springs and the artist colony of Yaddo, so some writers have taken a break from the Spa City to check out our books. From the imposingly tall Donald Antrim ("The Hundred Brothers" is a hilarious novel) who strode in the shop in biker spandex that seemed to add another foot in height, to the friendly and down to earth author A.M. Homes (who coveted my "It's Always Time to Read" clock in the children's section), it's always interesting and gratifying to meet someone who makes the stuff I sell.

Authors come in many packages. Some shun attention like Jonathan Lethem, who I only recognized after I read his name on his credit card slip. I yammered on about how much I enjoyed "Motherless Brooklyn" but tuned in quickly to his desire to leave with his pile of books without any more chatter. Pulitzer Prize winner Stephen Millhauser ("Martin Dressler") was similarly demure when he came in to quietly buy some fiction and grudgingly agreed to sign some (but not the paperbacks) of his books that we had in stock. His companion that day, Skidmore College Professor colleague Steve Stern, prowled around himself for copies of his short story collections to sign.

Despite his reticence, Millhauser has a special place of dedication in our shop as pictur 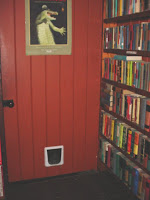 ed on the right. The shelf of Modern Library classics lies somewhat dangerously in front of the door leading to our basement lair and storage area and my husband didn't know that a famous author was afoot when he briskly strode upstairs and flung the door open, nearing bowling poor Millhauser head first into some Ibsen plays. Someday we'll get around to putting that historical plaque up.

The biggest "rock star" in the bookshop, though, has to be Ruth Stiles Gannett, author of the fantastic "My Father's Dragon", who charmed her way into my psyche with her modesty. You can read all about it my gushing vintage blog post here.

We sold an antique children's book over the Internet to the late William F. Buckley in one of the first years we were in business and just last year sold a cookbook to "Salt" and "Cod" author Mark Kurlansky. That last transaction was spooky, because Dan has just finished "Cod" the night before and we brought the book in to the shop to be housed on our "Books We've Liked" shelf. Kurlansky's call came a few hours later and he wasn't particularly interested in discussing the whole synergy of the transaction (or perhaps was working under a deadline), so that was a brief encounter. Still, kinda cool.

In 1997 we hosted historian Richard M. Ketchum for a book signing of his lively "Saratoga: Turning Point of America's Revolutionary War". Ketchum was an editor at American Heritage for many years and has written many other engaging history and nonfiction titles. He was a courtly and delightful guest at our shop and took the time to speak at length with many of our customers, even the aggressive ones who conducted their conversations with a proprietary hand on his arm. Earlier this year we were also pleased to host Sheridan Hay in our shop for a signing to celebrate the trade paperback release of her bookstore novel "The Secret of Lost Things". She was a similar delight: warm, attentive to all who came and enthusiastic about chatting about other books.

There are many Saratoga County writers who have graced our shop: the prolific Joe Bruchac: poet, reteller of Native American tales and children's author ("Skeleton Man" is Scary with a capital S and highly recommended); Jennifer Armstrong, children's author extraordinaire whom I predict will one day score a Newbery Award; soft spoken Barry Targan, who brings the best books in to trade and who writes novels and short stories in between building handmade boats; Amy Godine, an Adirondack and Saratoga history writer who gobbles down books like candy; and Saratoga gadfly and urban planning critic James Howard Kunstler, who is best known in the larger world for his book "The Geography of Nowhere" and in Schuylerville as the infamous author of a critical New York Times Magazine article.

We're still waiting for William Kennedy to stroll up from Albany and I sure would whoop up a storm if Russell Banks dropped by, but all in all it's still a thrill when we get a real live author in among the ones on paper.
Posted by Rachel at 2:32 PM No comments:

The following is my select reading list of novels that give front and center to delicious plots and passages about food, chefs, restaurants and other gourmet attractions. The Book Trout has read many of them, and they run the gamut from cozy mysteries and chick lit novels to literary classics. Please feel free to add comments below to suggest additions to this hors d'oeuvre.

Allison, Karen, "How I Gave My Heart to the Restaurant Business: A Novel", (NY: HarperCollins, 1997). A novel of the New York City restaurant business by a former three-star restaurateur.

Carter, Sammi - Chocolate Mystery series. See JoAnna Carl above. Another cozy series with another divorcee in a chocolate shop.

Davidson, Diane Mott - Goldy Bear Culinary Mystery series. Davidson is the reigning queen of the culinary mystery series, with a Colorado caterer, Goldy Bear, who solves many a whodunnit in between whipping up fabulous feasts. Recipes included.

Esquivel, Laura, "Like Water for Chocolate" (NY: Anchor Books, 1992). The author's first novel, a magic realist AND foodie classic. The Mother of all Foodie Novels. Esquivel interweaves the bittersweet story of a young Mexican woman, Tita de la Garza, whose home cooking is infused with her emotions after her mother forbids her to marry the love of her life. A recipe for a Mexican dish or folkloric home remedy heads each chapter.

Flagg, Fannie, "Fried Green Tomatoes at the Whistle Stop Cafe", (NY: McGraw-Hill, 1988). A folksy foodie classic set in a down-home Southern cafe during the 1930s. You can almost taste the pimento-cheese sandwiches.

Gordon, Nadia, "The Sunny McCoskey Napa Valley Mystery series". Chef Sunny is the heroine of these novels which feature her organic restaurant and the other bistros and wineries in this California region.

Hendricks, Judith Ryan, "Bread Alone" (NY: William Morrow, 1993). Wynter Morrison gets ditched by her upwardly mobile husband and drifts over to Seattle, where she works in a bakery and heals her sore heart with breadmaking.

Hildenbrand, Elin, "The Blue Bistro" (NY: St. Martin's, 2006). Described as a sophisticated romance novel in which upscale Nantucket restaurant hostess pines for the affections of her boss, who dines nightly with a female chef.

Jaques, Brian - The Redwall series. This juvenile fantasy series is chock full of feasting scenes among the Good animals (hares, voles, otters, badgers) of Redwall Abbey. They work hard at the harvest and in fighting off the Bad animals (foxes, rats, wild cats) but then enjoy bountiful harvests of nut-studded cheeses, ales, casseroles of grains and vegetables and toothsome, honey-drenched desserts.

James, Kay-Marie, "Cooking for Harry: A Low-Carbohydrate Novel" (NY: Shaye Areheart Books, 2004). This light confection was written by a best-selling author under the pen name of Kay-Marie James to raise money for her financially-strapped best friend, so there's a mystery underpinning this tale about a chubby hubby whose gourmet hobby must be curtailed on the advice of his doctor. Plenty of mouthwatering cooking scenes.

Lyons, Nan and Ivan, "Someone is Killing the Great Chefs of America" (Boston: Little, Brown and Company, 1993). A sequel to the Lyons' wildly successful gastronomic murder mystery, "Someone is Killing the Great Chefs of Europe", which was made into a 1978 film with the wonderfully comic actor Robert Morley as the overweight gourmand determined to sample the specialties of various world-class European chefs, but finds that they are fatally "prepared" in the same way as their dishes before he can dine. In this American sequel, murder breaks out at a Culinary Olympics.

Mason, Sarah J., "Corpse in the Kitchen" (NY: Berkley, 1993). English Det. Sgt. Trewley is aided by his scientist and judo expert partner, Sgt. Stone, as they investigate the murder of a baker, suffocated by a wad of her own bread dough.

McCouch, Hannah - "Girl Cook: A Novel" (NY: Villard, 2004). A chick lit novel centering on the trials of Layla Mitchner, looking for love and respect in the heat of Manhattan's trendiest restaurant kitchens.

Myers, Tamar - Magdalena Yoder series. These culinary mysteries feature Yoder as the owner/cook of an Amish inn located in the heart of Pennsylvania Dutch country. Loaded with down-home cooking and recipes.

Mones, Nicole, "The Last Chinese Chef", (Boston: Houghton Mifflin, 2007). Recently widowed Food Writer Maggie McElroy finds solace in classical Chinese cuisine when she travels to Beijing to write an article about a chef hoping to make a spot in the National Cooking Team for the 2008 Olympics.

Pezzeli, Peter, "Francesca's Kitchen" (NY: Kensington, 2006). Francesca is an Italian-American Queen of the Kitchen, who faces widowhood and an empty nest with sadness until she finds a new family to cook and care for as a part-time nanny.

Prior, Lily, "La Cucina" (NY: HarperCollins, 2000) . The Sicilian version of proto-foodie novel "Like Water for Chocolate", in which our middle-aged librarian protagonist, Rosa Fiore, leaves her raucous rural peasant family, comprised of six older brothers, a pair of younger Siamese twins, and her frequently absent parents when her lover is murdered by the Mafia. She becomes an academic librarian in Palermo and saves her passions for her cooking, until a mysterious English visitor, L'Inglese, enters her life.

Stout, Rex - The Nero Wolfe mystery series. Grand master mystery writer Stout wrote over 30 novels and 30+ short stories featuring his corpulent, housebound (by choice) detective Nero Wolfe, whose sidekick Archie Godwin does all the legwork in solving multiple murders. Wolfe's passions are for growing orchids in his opulent New York City brownstone and for the three gourmet meals his personal chef Fritz prepares for him (with Wolfe's critical suggestions).

Temple, Lou Jane - Heaven Lee series. Lee is the chef at her Kansas City restaurant, Cafe Heaven, and sleuths for clues when she's not cooking there or judging barbeque contests in this cozy culinary mystery series.

Winston, Lolly, "Good Grief", (NY: Warner Books, 2004). Sophie is a young widow with panic attacks and depression who moves to Oregon to make a fresh start as a culinary student and bakes her way through her grief.