A Vinegar Valentine for a Mannish Female

I was recently at an antique store and leafing through some paper items when I spotted this colorful illustration and poem: 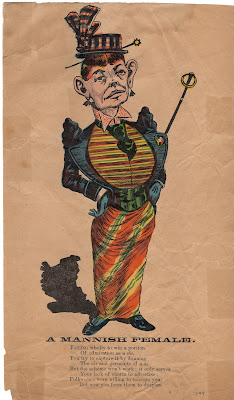 It depicts a caricature of a woman in tailored attire accessorized with walking stick, natty hat with hat pin and a pair of oversized ears. The cartoon is printed on tan paper, almost like a thin lunch sack and has red, blue and yellow overlays. It measures 27 x 16 cm. No printing on verso. "1899" penciled neatly at lower right corner.

There is a printed bit of doggerel beneath the image:

Failing wholly to win a portion
Of admiration as a she,
You try to capture it by donning
The air and garments of a he.
But the scheme won't work; it only serves
Your lack of charm to advertise:
Folks once were willing to tolerate you,
But now you force them to despise."

What in the world was this thing, I wondered? Was it a critique of a woman's rights activist? A lesbian? An advocate for rational dress for women? (As an aside, I just finished reading an excellent book, Dr. Mutter's Marvels: A True Tale of Intrigue and Innovation at the Dawn of Modern Medicine by Cristin O'Keefe Aptowicz, about the surgeon who pioneered many plastic surgery techniques. He treated many heavily disfigured women whose faces burned when they were quickly engulfed by flames from their layers of flammable and restrictive garments while cooking or working by lamplight).

A query at a rare book librarian's listserv unearthed the answer: this item is a Vinegar Valentine, a particularly misogynist example of an odious form of late 19th century/early 20th century "humor". It would have been sent anonymously to reinforce the social and gender mores of the sender. One can only imagine what the recipient thought of this particular bullying message, though this ephemeral item was preserved over the last century, so perhaps it was never sent.

Women who didn't know their place were not the only targets of these sour communiques. Poets, "hen-pecked" husbands (who supported their suffragette wives), fashion dandies, "floozies", surly sales clerks, mean bosses, and others could receive these mean-spirited missives which rolled off the penny presses to serve an increasingly literate population in the UK and US.

To see more examples of Vinegar Valentines and to learn more, here are some other informative articles to peruse:

Library Company of Philadelphia - Comic Valentines from the McAllister Collection

Here's hoping you only receive the nicest kind of love notes this Valentine's Day!

Posted by Rachel at 8:50 AM No comments: