So many books, so many postcards, so many trade cards and posters, and so little time...That was the vibe at yesterday's Albany Antiquarian Book and Ephemera Fair at the Washington Avenue Armory. Organized this year by Garry Austin


of Wilmington, Vermont-based Austin's Antiquarian Books, it was Old Saratoga Books' first appearance as a bookseller and the overall experiment proved successful indeed. I got to see many familiar faces among the exhibitors and browsers and there was steady traffic throughout the six-hour show.


On the Saturday set-up day, I found that other booksellers swooped in even before I could unpack my four wooden folding shelves and eleven boxes of books, so I made a few quick sales to subsidize the exhibitor fee. One sale was a cool Civil War broadside with a map of the shrinking Confederate states, exhorting New York State voters to support Lincoln's mandatory draft and other military strategies which then Governor Horatio Seymour was criticizing. The other nice sale was an 1830s biography of Lemuel Haynes, an African-American minister (the first one to serve a white congregation) and abolitionist who lived in various parts of upstate New York and Vermont. 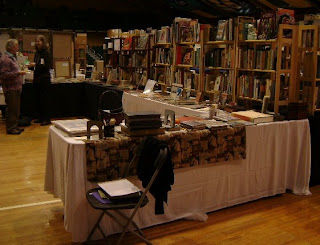 Most of the books and paper items I brought to the Fair were not as rare as these items, though, and I had a display of  more modestly-priced volumes that I thought would be of interest to a wider range of buyers. I sold some antique children's books, a book about whiskey, a handwritten Victorian-era journal, some Jack London and Charles Lindbergh, a Richard Brautigan first edition and a smattering of other cookbook, music and art titles, but the big sellers were the selection of vintage paperbacks I had strewn about for eye candy. These were particularly appreciated by the 20-somethings in the crowd, who alternately scooped them up because of the campy cover art or because they were oddball titles. I also brought what little ephemera we've accumulated over the years and these little pamphlets, postcards and advertisements were a popular item for us as well.

There were quite a lot of lovely books to peruse at my colleagues' tables. I was tickled by the antique medical calendar offered by Evie Eysenburg which featured elves with giant skull heads mixing up pharmaceutical potions.


Her booth partner, Patricia Reilly, also had a colorful collection of eye catchers, including a tremendously intricate homemade Valentine. Patricia also very kindly loaned me some cash when I noticed that I had forgotten my stack of  $1s and $5s for making change when I had my first customer. She truly has not one, but two hearts of gold!

Both Evie and Patricia seemed to have a nice stream of customers flipping through their binders full of trade cards, advertising posters, folk art and unusual ephemera, and it seemed to be the general consensus among other booksellers that I spoke with that ephemera sells quite well at the Albany Fair.  I will definitely keep my eye out for more papery items when I'm out book hunting, as ephemera only dribbles into the bookshop, most usually retrieved from the pages of our incoming books.

Rounding out the other ell of our U-shaped booth, was my new biblio-buddy Anne Brockschmidt of Carnegie Hill Books of Manhattan, which specializes in architecture, decorative arts and design. She had some beautiful bindings and interesting titles and ended the day happy with her day's business.


My neighbor to the north was another first-time exhibitor at the Albany Fair, Mark Brumberg of Boomerang Books.  Mark owned the Globe Bookshop in Northampton, Mass. and then worked at the nearby National Yiddish Book Center before starting his own rare books business. (Read the Book Trout review of Aaron Lansky's "Outwitting History: The Amazing Adventures of a Man Who Rescued a Million Yiddish Books"). He has a great inventory of modern first editions, many of them signed, including this great copy of Tim O'Brien's "The Things They Carried".  You also gotta love a guy who whoops when he finds an unexpected cache of his wife's cookies stashed in his lunch bag.


My New York colleague, Will Monie of Cooperstown, who nudged me to get untethered from the bookstore and exhibit at the Albany Fair, was on hand with an impressive display of unusual books. Will really makes great use of his exhibit space, with shelving lining both sides and ends of his booth and he had a lot of trade back and forth whenever I glanced his way during this event. Will also organizes the annual Cooperstown Antiquarian Book Fair in June, and I am mulling over whether to become untethered again for that one.

And now to reveal the most interesting bit of conversation overheard at the Albany Fair. There was a snappily-dressed book dealer whose name I never did get, who was chatting behind me right before the line of browsers was unleashed who made me laugh out loud when I heard that he "was really into promiscuous pricing". I never did get the chance to run over and ask him to explain that one to this Book Fair newbie, but to hear more of this kind of lively talk, see huge numbers of gorgeously illustrated and bound volumes, pore over interesting and esoteric titles, and engage in some spectacular people watching (what is it with biblio-folk and their chapeaux?) you'll have to wait around until the 38th Annual Albany Book Fair.

We will be exhibiting some of our books and other papery items at the Albany Antiquarian Book Fair at the Washington Avenue Armory in downtown Albany this Sunday, October 23, from 10 am to 4 pm. Admission is $6.00. For directions, information on the 40 or so other participating booksellers and more information about the Fair check out their website.

It's Old Saratoga Books' first time as an exhibitor at the Fair and Rachel will be there with an assortment of titles from our 50,000 volume inventory, including some volumes that we have recently acquired and not yet offered for sale in our shop, including an interesting New York State Civil War broadside, many vintage and antique children's books, and some interesting horse and fly fishing titles.

See you at the Fair!  For a peek at last year's Albany Book Fair, you can investigate the Book Trout's view as a visitor here.