The Book Trout was on the road at the as a first time exhibitor at the Brattleboro Book Fair, the summer show for the Vermont Antiquarian Booksellers Association. I had previously had a good experience at the Spring Book Fair in Burlington, and since Brattleboro is even closer to home, it was easy to pack the old Chevy Blazer up with some folding shelves and boxes of books (this time only seven boxes, which seemed a little skimpy after setting up). 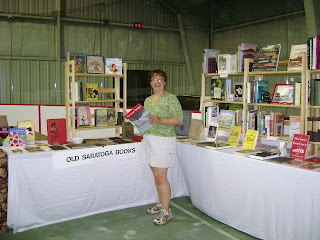 We set up on Saturday during extremely unsettled weather conditions. My hair-o-meter told me it would rain imminently and it did, very hard, on the last trip back out to the car, with all my windows and back hood up. The temperature wasn't too bad inside the venue, but you can see that all those damp booksellers and their soggy boxes raised the humidity to rain forest levels and when we came back the next day to start the show, lots of softcover and paper items were curled up or droopy, causing some rearrangement of book displays. 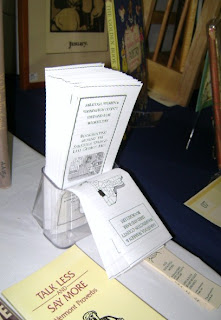 I brought my mom, Carol Marie Davis, a Vermont author, to help me out with my booth. She has written two books thus far, The Adventures of Moonspirit: A Girl from Florida's Past and Anna: Heart of a Peasant and is researching on a third book, tentatively to be about some handmade dolls that travel up the Underground Railroad during the Civil War era. 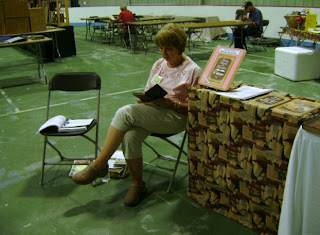 Mom seemed to enjoy minding our booth at the Book Fair. Unfortunately my free labor situation may be in jeopardy as I was ratted out by my colleague, Richard Mori, who informed her that I was not only supposed to pay her for helping me out, but I was to throw in a free lunch! I'll find a way to fix his wagon at the next book fair.

My tables adjoined a space with Mary Faneuil Hill of Old & New England Books, who had a lovely display of Tasha Tudor books and history volumes, spiced up with a couple of Punch and Judy puppets. Mary has a seasonal shop in Newfane (open May through October) and regaled us with stories about having Tasha Tudor come to her shop many times for signings and visits.

Mom really was excited to meet Donald H. Cresswell of The Philadelphia Print Shop, who appears often as an appraiser on the Antiques Road Show. He was very generous with his time with Mom and other fairgoers and she was thrilled to pose with him and an Audubon print of an osprey. Cresswell was one of several exhibitors who offered ten minute symposia throughout the Fair on various bookish topics such as prints, Theodore Roosevelt, and folk music. This continuing education idea is the brainchild of the gregarious Book Fair impresario Gary Austin of Austin's Antiquarian Books in Wilmington, VT. 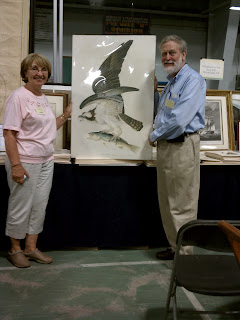 (Intriguingly, right after the Fair I read The Island of Lost Maps, by Miles Harvey, which is all about the world of antique maps, and it turns out that Cresswell used to work for Graham Arader, who features prominently in the book. It's a fascinating read. And Mom recommended it to me, so you can see why I want to keep her on as an adjunct employee).


It was nice to see some familiar bookseller colleagues at the Fair. Donna Howard of The Eloquent Page in St. Albans, VT was there with an eye-catching booth, and I was pleased to see John and Carol Hess from Arlington, Vermont's Catamount Books. They are a delightful pair and I have to say that they won the Biblio-Synchronicity Award from my perspective with their side-by-side display of a copy of The Sucking Lice of North America next to a photo-essay entitled "Asses". 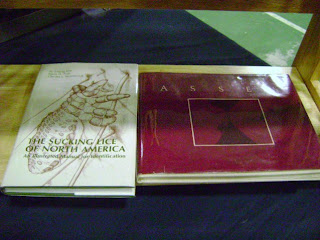 The most luscious eye-candy that I saw at the Fair was at the nearby display of Susan Krinsky, of Brandywine Antiques and Books of Amherst, New Hampshire. She had so many lovely antique children's books and other lovely titles, and I couldn't resist a few snaps. 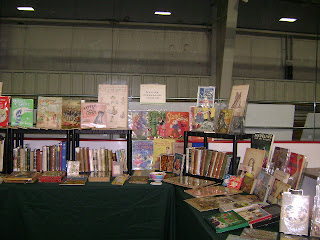 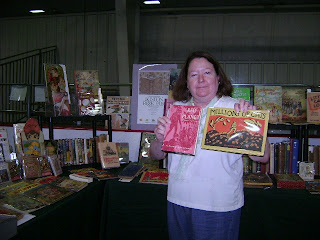 All in all, a great day at the Brattleboro Book Fair. The venue was well-lit and there was plenty of space for the crowds and exhibitors to spread out. We sold some books (mostly Vermont history, vintage paperbacks and children's books), gawked at many others and had some illuminating conversations about authors, illustrators, book history and other bibliophilic topics, so I will be sure to be back next year.
Posted by Rachel at 9:35 AM No comments:

I am a busy bookwoman squirreling away some of my lovely recent acquisitions to bring to the Vermont Antiquarian Booksellers Summer Book Fair this Sunday, August 12 in Brattleboro. The Fair runs from 10 am to 4 pm at the Withington Skating Rink in Brattleboro Living Memorial Park. For more information and directions to the Fair, see the VABA website. 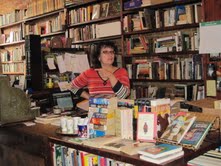 At my booth you will find me, my mother (an author of two books!) and lots of Vermont and New England history, folklore and books by Vermont authors. I'll also be bringing some choice books from our collector's section, including a lovely copy of The Nutcracker illustrated by the late Maurice Sendak, some Victorian etiquette books, a signed Mickey Mantle memoir, and some nineteenth century children's books.

Hope to see you in Brattleboro!
Posted by Rachel at 8:29 AM No comments: