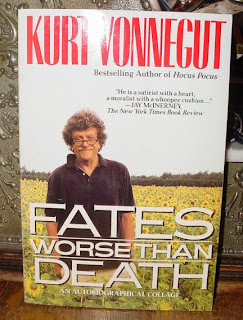 Kurt Vonnegut has just died and the world is a poorer place. Dan and I regard him as one of our favorite authors and thinkers and we are saddened that he is gone. In the pantheon of beloved novels on our home library shelves Vonnegut is well-represented.

I first read Vonnegut in high school in the 1970s, under the tutelage of a hip, kooky-in-a-good-way teacher whose last name I can't remember, but who was known by all as "Fondly, Tanya" by the way she signed comments on our English compositions. We teenagers loved the course because she had us read a lot of contemporary classics in between Shakespeare and Hawthorne and Dickens. Vonnegut's "Cat's Cradle" was on the syllabus and it remains one of my favorite fantasies.

Fast forward twenty years: Dan and I were in the second year of operation here in the village of Schuylerville, New York (population 1,197). Dan answered the bookshop phone and almost passed out when someone identifying himself as Kurt Vonnegut wanted us to look at some books for sale. It turned out to be author Vonnegut's nephew, who wanted us to look over his late father Bernard's books. Bernard was a professor of meteorology at the State University of New York at Albany and provided some inspiration for his brother's ice-nine passages in "Cat's Cradle".

We ultimately purchased these books, and while we found no signed or first edition Vonnegut titles, we were amused and delighted with the books we had. In between esoteric weather science titles were lots of books by H.L. Mencken and Mark Twain, which nephew Kurt indicated were favorites with the Vonnegut boys. Later on, Dan and I read "Timequake", Vonnegut's quasi-autobiographical novel which referred to his brother with great affection, and we smiled again.

America has lost one of its greatest contemporary writers and we salute his memory.
Posted by Rachel at 11:52 AM

Email ThisBlogThis!Share to TwitterShare to FacebookShare to Pinterest
Labels: Authors