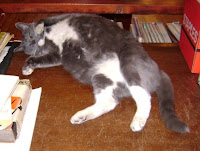 So yesterday I'm busy pricing up a stack of books at the helm of Old Saratoga Books when I register the sound of squawking birds in the background. I thought it was just a territorial dispute between a couple of birds, but then I saw a dark grey blob skulk past the counter and it was my hunter cat, Sam, normally a sedentary lover cat, with a baby sparrow in his chops.

I somehow got to him before the poor fledgling was harmed, but I was not left unscathed for my maternal pains. Sam scratched and bit and wanted to keep after his bird toy as I dragged his twisting carcass off to a basement quarantine. Of course, when I got back to scoop up the birdling it had hopped off to one of about 1,000 possible hiding places in our bookshop. I spent the better part of two hours whistling and dusting and trying to find my new pet, while Sam yodeled indignantly from below. There were no peeps, no trails of white bird doo-doo, nothing.

It was only after I gave up the hunt and was back to my bookish chores, stooping to throw out something in my wastebasket that the vicious sparrow baby popped its head up and scared me to death. Sam was snoozing away again, so he didn't see me chase after the surprisingly hot little scamp, still sporting a smattering of grey down. I grabbed it and placed him/her on a sidewalk tree branch. Happily, a mamma sparrow showed up within an hour of mournful cheeping by my baby bird friend and she kept up with bug feedings until closing.

Just another day at the old bookshop. Today Sam sulked and wouldn't come onto the counter where he normally craves my company during business hours.
Posted by Rachel at 8:27 PM

Email ThisBlogThis!Share to TwitterShare to FacebookShare to Pinterest
Labels: Sam the Cat