It was the second time round for Old Saratoga Books as an exhibitor at the Chronicle Book Fair at the lovely Queensbury Hotel in downtown Glens Falls. Last year I brought way too many books and way too many shelves and this time reined in my inventory, bringing only two folding shelves to put atop my table (since people never look below their navel as I found out last year) and 12 boxes of books. Still, I think this was 3 boxes too many, as I didn't have an ability to flop out all the books I wanted. Indeed, a few boxes never even got unpacked and served as stands beside my table for my ephemera display. 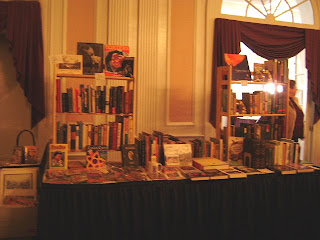 And, as was the case last year, what sold were books that were facing out. That Robert Sabuda pop-up book (with the yellow star on the front cover) sold almost immediately, and my Ernest Hemingway photoessay (top shelf left) caught a bibliophile's eye from across the room. Other interesting titles sold throughout the day included a Puerto Rican cookbook, a Looking Glass edition of George MacDonald's "The Princess and Curdie" (with Edward Gorey typography), biographies of James Thurber, Dashiell Hammett, Mama Cass and Robert Fulton, Roald Dahl juvenile fiction in hardcover, Adirondack history, some old postcards, gardening books, a signed children's book by William Kennedy, a book on Irish pubs, and assorted other music, cooking and literary titles. 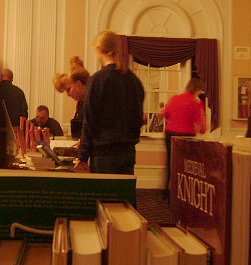 My bestsellers, however, as was the case two weeks ago at the Albany Antiquarian Book Fair, were the vintage paperbacks. The more lurid or ridiculous the cover art, the better they sold. One older lady was particularly funny when she pointed to a copy of Erskine Caldwell's "Tobacco Road" and told me this was a "spicy" book that was passed around back in her high school days. Now, even children's programming shows more cleavage (bust and butt) than that paperback cover and surely this novel would seem tame by most readers' standards.

The crowds at the Chronicle Book Fair were nice from 10:30 am (many browsers drifted in early) to about 2 pm and then rather precipitously dropped off. This left a little time to sneak away to chat with Gluten Free cookbook author Amy Rota-Poulin and my fellow bookseller, Victoria Garlandia at her Three Wise Women booth to snag a few local history titles.

I will definitely be partcipating  in next year's fair, as the sales were good and this event gets the word out about our bookshop to a devoted group of bibliophiles. Next year I will bring a big sign though, with our store name, address and slug about buying and selling used and rare books, as people don't seem to notice the bookmarks and brochures I strew about my booth.