Having attended and exhibited at a number of "provincial" book fairs, it was a special treat to visit the grandaddy of them all, the ABAA's New York Antiquarian Book Fair. My reconnaissance mission was overlaid with the pleasure of seeing some bookseller friends in action and having my daughter want to accompany me after so many years of thinking what her dad and I do is hopelessly pointless and boring.

The Book Fair is the premiere attraction of New York City's Rare Book Week and had begun on Thursday with an evening preview. I arrived on Sunday, when I thought the crowds would be thinner and I could spend more time browsing. The atmosphere did seem a bit more subdued than I had imagined and there was more than a hint of general weariness among all the booksellers, given that this marathon event had begun with Wednesday setup and travel, and weeks of preparatory duties before that. I don't even want to think about the logistics of what some of the international dealers had to go through for this event. 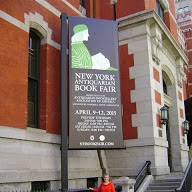 While we were in line for tickets I ran into Molly Russakoff, of Molly's Books and Records in Philadelphia. Molly and I met last year at the Colorado Antiquarian Book Seminar (CABS). She and I were both anticipating looking at some amazing book booths, having such a greater knowledge of what it takes to acquire, present and sell antiquarian material - not to mention having to schlep it all in. 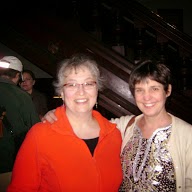 I spied a few other alumni from the CABS Class of 2014 who were assisting various ABAA booksellers, including Mr. Jeffrey Rovenpor, Noah Goldrach, and Nelson Harst.

CABS Director and Minneapolis-based bookseller Rob Rulon-Miller was there with an artful display of unusual dictionaries (one of his specialties), illustrated books and assorted antiquarian material. I had never seen a copy of Rockwell Kent's first illustrated book Architec-tonics: Tales of Tom Thumbtack, Architect and Rob noted that his copy is particularly rare for having retained its original dust jacket. That's Rob on the right with the lanyard and Rockwell at center stage on the lower bookcase shelf resplendent in his smashing light blue jacket. 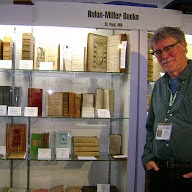 Two of the most welcoming and humorous booksellers I know were anchoring a booth at the east side of the Armory: Ron Cozzi of Buffalo's Old Editions Bookstore and Jeffrey Bergman. For his 21st consecutive New York Book Fair, Ron was surrounded by an impressive array of Rivers of America series books, regimental histories and beautiful bindings, but he most tempted me with two titles; an 1890s Gollywog picture book for children- which, though lovely and interesting- makes Little Black Sambo look politically correct; and a 1970s MOMA art exhibition catalogue featuring a jacket illustration by Henri Matisse in bold black brushstrokes. Jeffrey was busy stacking up modern firsts for a customer while I was ogling Ron's books, but he was very gracious to interject a nice welcome.

The books and other items at the Fair were universally magnificent and worthy of homes in the most sophisticated book collection, library or museum. How about that page out of Virginia Woolf's passport, complete with her photograph and signature? Interested in a copy of Slaughter House Five bedazzled with an inscription and self-caricature by Kurt Vonnegut Jr., complete with his ever-present smoking cigarette? I saw illuminated leaves from the 15th century, engravings of the extinct dodo, a Figbash doll handmade by Edward Gorey, a hastily scribbled lyric from the pen of Bob Dylan, a sea of miniature books, an R. Crumb pen and ink of himself and his wife seated at a bar, Ernest Hemingway's first book of poems, medieval illustrations of popes with dragon bodies, antique maps, Big Bill Broonzy's autobiography, and a range of truly rare and beautiful items, all in impeccable condition. It was heady stuff.

While most items at the New York Book Fair were well out of my price range, I did pick up a nice book for my reference collection from Boston's Bromer Booksellers, where the range of Goreyana particularly entranced a certain graphic design student raised on The Gashlycrumb Tinies. 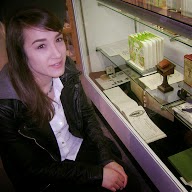 Brattleboro, Vermont-based booksellers Matthew and Adrienne Raptis of Raptis Rare Books were there with a large and sumptuous array of biblio-eye candy; truly one of their gorgeous catalogs come to life. Classic literature, fine sets and books about economics and finance comprise the bulk of their stock and all the high spots were there in luscious condition.

I was delighted to stop in and peruse the offerings from two other CABS faculty members, Nina Musinsky of Gotham's own Musinsky Rare Books and Brian Cassidy, Books, whose antiquarian stock could not be any more disparate. Nina's inventory are jewel-like examples of early printed books, like almanacs with exquisite embroidered covers, illuminated book of hours, books with hand-colored plates of 18th century fashions, and incunabula. 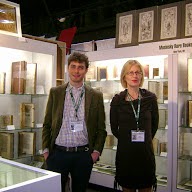 Skipping ahead several centuries we get to the kind of material that Brian Cassidy unearths and preserves for us all: zines, mimeographed handbills, poetry chapbooks and broadsides, photograph archives, scrapbook albums and literary ephemera that document the "cultural detritus" of more contemporary times. Brian and Ian Kahn of Lux Mentis shared a booth, the most vivid and eye-catching of the Fair in my opinion, and Kahn took particular pleasure in ribbing Brian after I hailed him with "Perfessor Cassidy!". That coming from a man whose booth was crowned by a picture-poem worthy of the Red Hat Society. 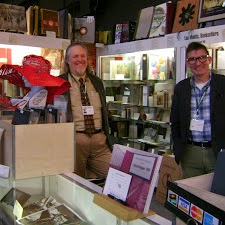 I was eager to check in with Greg Gibson at Ten Pound Island Book Company, who, in addition to his brilliant writing in his own books and blog, had recently welcomed me so warmly into the fellowship of IOBA, but he was elsewhere, probably sniffing out amazing maritime history rarities from his colleagues. Greg has already blogged up his thoughts about the New York Book Fair (and the two shadow book fairs) here. You can also check out Rebecca Rego Barry's review of the three NY Book Fairs at Fine Books and Collections. 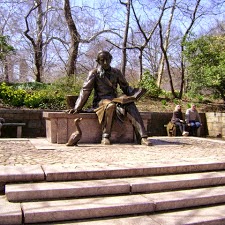 In addition to visiting the New York Book Fair, I packed in some more literary doings by attending an interactive production of Hamlet, rambling through Central Park to peek at the Hans Christian Andersen and Alice in Wonderland statues and examine the books, paintings and sculpture at The Frick Collection. A memorable weekend of wonderful books and events, indeed. 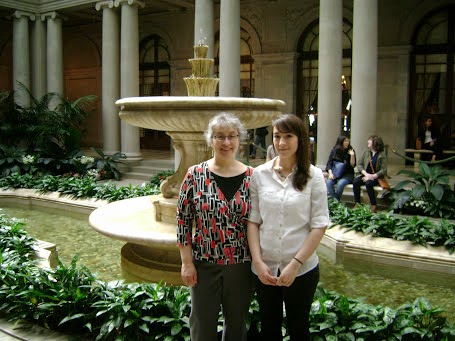