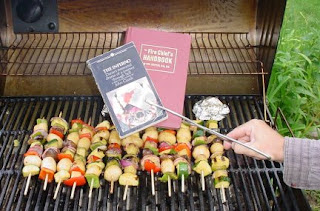 On this Father's Day eve, I will comment on the burning of books. Recently, there was much media attention paid to a Midwest bookseller who charbroiled a few books outside his shop as an "artistic" protest against America's disinterest in reading. Twisted logic, yes, and a cynical, if brilliant publicity ploy. I winced at the association of this action and other book burnings throughout history by anti-intellectualist creeps of various stripes. The whiff of Fahrenheit 451 also stunk up this action. Yes, the biblio grillmeister had a great marketing scheme but I would have to agree with Michael Leiberman of the Seattle bookshop, Wessel and Lieberman, who roasted the "Book Pyro" on his thoughtfulBook Patrol blog and his actions, and noted that it wasn't good in the long run for sellers of books. We don't want to be the guys seen charring up the books. The genial bookseller and lover of literature should not be wearing the barbecue chef's hat and fireroasting books that still have a useful life. That shows disdain for books and that's a bad thing. Much better I think is the option of giving away, finding homes, or recycling them.

I am curious to know whether these victims of the Barbecue Book King's flambe party were in fact book crud or books that were in good condition. If the former, then I must divulge the dirty little secret of booksellers. We jettison books all the time. Damaged, waterstained, underlined, highlighted, common as dirt, obsolete and imcomplete encyclopedia sets, moldy books, these all get thrown out.

Book schlock (the mass-published bestsellers of yesteryear, weird vanity press publications)in good condition get donated to various libraries, thrift shops, senior centers (they snap up all my romance paperbacks like piranhas according to my informant who brings them over for me), and the laundromat across the street. But the barrel scrapings get hauled to the book and magazine dumpster at the local recycling center. Often, people will see Dan and Ichucking this stuff in and ask to look it over for first. Thankfully not very often, some poor sot will lecture us about how we could be donating this drek to the local library. Depending upon the state of my overtaxed lumbar region, I may stop and give them a short reply about how truly crappy these books are and how 99% of this stuff would just need to be hauled back to the recycling center by hardworking library sale volunteers. Usually I just offer a curt invitation to help themselves to whatever they want.

One of my colleagues called to whinge with me about the quiet sales of late and noting that he had stopped buying as many books in the shop. We commiserated about the inundation of phone calls about potential book buys and with people lugging bags of books in the shop. In our area we've all been turning away a lot of books because everyone is overstocked right now and both Internet and in-the-shop sales are light. My buddy noted that he had hauled several boxes of cruddy books to the recycling station on a Friday and on Saturday morning the same books showed up being offered for sale by some guy, who at least hauled them back out. Another bookseller colleague recently related that he had hauled away several boxes of bibliodetritus, only to have them left on his doorstep by the disgruntled "book scout" who wanted him to buy them back and then left abruptly when rebuffed. So my colleague had to schlep this mess to the recycling station a second time.

Tomorrow, as I and the girls honor their most excellent father with a barbecue feast, we will be grilling shark and vegetable kebabs, not paperbacks.
Posted by Rachel at 7:33 PM

Email ThisBlogThis!Share to TwitterShare to FacebookShare to Pinterest
Labels: Bookstores