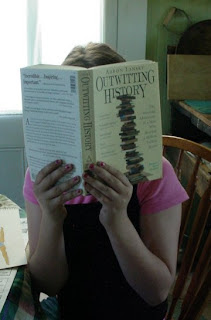 Several years ago I read and enjoyed Nicholas Basbanes' bibliophilic opus "A Gentle Madness", which included a piece about Aaron Lansky and the National Yiddish Book Center. This interesting tidbit is fully fleshed out in Lansky's own book, "Outwitting History", which was very edifying about Jewish culture and learning and an inspirational story of book passion unleashed.

Lansky started out as a crazed graduate student in the 1970s, on a mission to convince his professors to teach him Yiddish and then rescue as many books as possible before their owners threw them out or died. Yiddish was the vernacular language of Eastern European Jews, who were themselves decimated in the Holocaust, so Lansky's efforts brought this bit of Jewish culture back from the brink of extinction. (Although Lansky reminds the reader of Isaac Bashevis Singer's quote from a earlier era in his novel "Enemies: A Love Story" in which a bookshop owner retorts that he is not afraid of burglars when he closes up at night, but of Yiddish authors breaking in and putting in more books).

Lansky and his bibliophilic buddies began spreading the word that they wanted to collect Yiddish books. Many elderly American immigrants provided the core of the collection that eventually turned into a non-profit organization, housed in a lovely sprawling library designed to evoke a Russian wooden synagogue in the middle of Amherst, Massachusetts.

The bookseller in me enjoyed the universality of the book shlep: whatever the season, whenever you are moving huge quantities of books in a short time, you can always rely on adverse weather conditions. Blistering attics in the summer, driving rain, snowy side streets to traverse with an unwieldy van, stinging insects attracted to your book sweat; the list is long and arduous. I loved the humorous retelling of Lansky's role as The Eater when he is trying to wheedle books from elderly Jewish bubbes, while his companions get the mentally-easier book hauling chores. The health-conscious, quasi-vegetarian "Lohn-sky" must gorge himself on Rabelaisian spreads of Old World knishes, blintzes, chicken liver, latkes, kugel and other dairy delights at each book stop until he feels dizzy.

Throughout the book the author's passion for his job is riveting. He travels to Cuba and Russia and other corners of the world to unearth long-unread Yiddish books and to distribute other books to revitalized Jewish communities. He dives into snowy New York City dumpsters to rescue books, endures endless telephone calls and eating visits in order to snag lifelong book "friends" from older Yiddish readers. Noshing aside, he does write about his respect for the folks who donate these often-scarce books to him and relishes his talks with people who knew various Yiddish authors or who participated in various movements and events that he has avidly researched. There is a humbling passage at the end of chapter 14 where he acknowledges that even as well-read as he is, he is of a different generation, culture, and era than the book donors:

"No matter how respectful I was, no matter how intently I listened, it was never enough. They always wanted me to stay longer, return sooner, understand better or appreciate them more. And why shouldn't they? They'd been famous long ago, they'd lived front and center on the stage of history, they wrote books, they led, they learned, they taught, they organized, and now, in their old age, all they lacked was a yarshn--someone to whom they could bequeath not only their libraries but the sum total of their lives. God only knows they deserved it. And God only knows I tried. But in the end, what history had stolen from them, no one--not I, not anyone--could restore".

A wonderful read for any bibliophile, but a special treat for booksellers. Plus, you get to learn a lot of Yiddish, which is a very expressive. Highly recommended.
Posted by Rachel at 9:15 AM

Thank you for writing and posting this review on a remarkable book.